Protest Outside Finance Ministry over Salaries of MPs 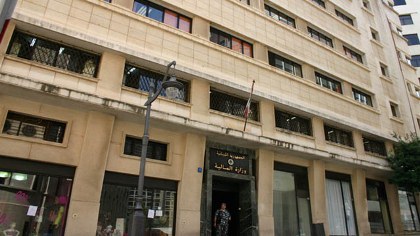 Civil society activists held a protest near the finance ministry in Beirut on Tuesday to stop the transfer of the salaries of lawmakers whom they accuse of being corrupt.

Police immediately deployed in the area to stop the protesters from entering the building similar to when demonstrators stormed the environment ministry earlier this month to demand the minister's resignation.

The activists from “We Want Accountability” and "Go Away" also protested when two of the movement's members were unable to leave the building after police blocked the entrance.

Beirut police chief Brig. Bassam al-Ayyoubi was quick to arrive to the scene of the protest.

He accused the activists of trying to storm the ministry but said security forces stopped them form entering the building.

“We had to resort to the streets to hold MPs accountable. They are not doing their job,” said one demonstrator.

“Our protest is peaceful,” he added.

"Our presence here is symbolic,” said another protester. "We will continue to hold similar protests. Our path is long."

Later, an activist read a statement saying the people are paying taxes but the authorities are spending the money on a parliament that is not functioning.

“We Want Accountability” said the finance ministry is making transfers at the expense of the poor people.

“We call for stopping the transfer of the salaries of the lawmakers,” said the statement read by the activist.

“There should be a fair electoral law based on proportionality that considers Lebanon a single district,” she added.

Civil society has been holding protests since the trash crisis erupted in July following the closure of the Naameh landfill that received waste from Beirut and Mount Lebanon.

The demonstrations grew into a popular uprising against the political class that has dominated Lebanon since its civil war ended in 1990.

100%
all lebanese are behind this movement, you'll recognize the infiltrators by seeing who on this forum is foaming against it.

You'll recognize us the infiltrators by the tattoos and pendants of our bee2a al 7adinat lil anointed iranian terrorists mercs we proudly display, a tradition we stole from the drug gangs in south America.

did someone just bark?

I donno are you in an earshot of a sewer, a barker hides in there since 2006.

those with the 313 tattoo , agreed mowaten

is that all you have to say mowaten? Do you consider what you wrote a political opinion?

momo... a tattooed guy belonging to Amal was recognized among the trouble makers. But i think that we can agree about the fact that these trouble makers are not what counts here. What counts is that the people are fed up and express it..

hello thepatriot
I am a close friend of flamethrower and i vote on his behalf whenever he asks me to. He wants to know why he was banned and treated like a diseased leper?

There is a silent majority in Lebanon that is no longer silent. All Lebanese law makers /politicians are corrupt and starting to feel under pressure by the Civil society. However, it is the same silent majority who allowed corruption to go on, because of its civil nature and due to Lebanon's rooted Feudalism system.

It is the beginning of real change..

well said and nothing can be added or should be added.
perfectly cooked