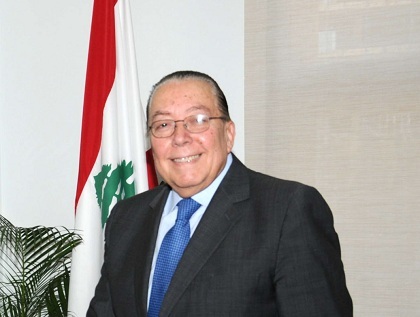 Environment Minister Mohammed al-Mashnouq reiterated during talks with hunger strikers on Tuesday that his resignation would have negative consequences, one of the activists said.

Waref Suleiman, who has been on hunger strike for the past 14 days, said al-Mashnouq told the delegation that he was fighting corruption similar to civil society activists.

“We will remain here to hold (officials) accountable,” Suleiman said at a press conference he held outside the environment ministry in downtown Beirut.

Several young men erected a tent and went on hunger strike after protesters from “You Stink” movement stormed the environment ministry earlier this month, demanding al-Mashnouq's resignation over his failure to resolve the waste crisis.

The majority of the hunger strikers have been treated at hospital over the deterioration of their health. But they have returned to their protest tent.

Angry protests that suddenly erupted last month over the government's failure to deal with the garbage crisis have evolved into the most serious anti-government demonstrations in Lebanon in years. The protesters seek to challenge a political class that has dominated Lebanon and undermined its growth since its civil war ended in 1990.

The protests have attracted supporters from across Lebanon's political and religious divides, reflecting the growing frustration with an aging and corrupt political class that has failed to provide basic services, but for which there appears to be no clear alternative.

In addition to the "You Stink" movement, the protests are being led by some half a dozen civil society groups with names like "We Want Accountability" and "We're Disgusted."

love that you guys are taking advantage of this platform to have some constructive discussions.

why the nervous laugh mowaten?

mowaten, who pays you to post and for what exact purpose? I demand answers and quick!

mowaten, did somebody mistakenly tell you you were funny?

↑ that's as classy as a farateener can be

The mafia will do every thing to stay in power, the only way is for the country to have a military coup otherwise the mafia will continue to cling on to power.

how is your smile?