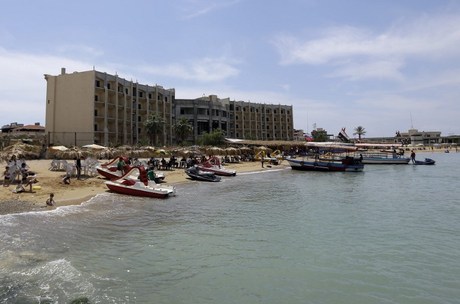 Russia's recent military build-up in Syria aims not only to boost the embattled regime of crucial ally Bashar Assad but also to send a strong signal to the West, experts say.

With President Vladimir Putin set to make Syria a key issue of his address to the U.N. General Assembly in New York later this month, Moscow is making it clear that it will not be ignored in the Middle East.

The build-up has underscored deep international divisions on Assad, has complicated efforts to tackle the jihadist Islamic State group and left Washington scrambling to respond.

For Daragh McDowell, an analyst with the Verisk Maplecroft consultancy, there is little doubt the move is "aimed at forcing the U.S. and the West to re-engage with Moscow.

"This is an attempt to ensure Russian views on the future of Syria and the fight against (IS) cannot be dismissed," he said.

Russia's alliance with Syria goes back half a century, with many Syrian military officers receiving training there and Moscow maintaining a naval base in the port of Tartus.

U.S. officials and sources on the ground say in recent weeks Russia has bolstered its presence, including in Latakia province, a stronghold of the regime and Assad's traditional heartland.

Russia has reportedly moved artillery units and tanks to an airport in Latakia province, along with dozens of personnel and temporary housing for hundreds more.

Residents of the province describe an influx of Russians in local shops and restaurants and a Britain-based monitoring group reported Russia was building a runway at an airport in Latakia.

The build-up comes at a difficult time for Assad in the civil war that has ravaged Syria for more than four years, leaving more than 240,000 dead.

The regime has suffered a series of setbacks in recent months -- including the recent loss of Idlib province to a rebel coalition -- prompting an unusual admission from Assad in July that his forces are suffering "fatigue."

Military experts say Syria's army has been roughly halved from its pre-war size of 300,000 by deaths, defections and increased draft dodging.

The government has sought to fill the gaps by organizing local pro-regime militias and leaning on Lebanon's Hizbullah, as well as Iranian military advisers.

Bassam Abu Abdullah, director of the Damascus Center for Strategic Studies, said Russia was not yet dispatching ground troops but rather advisers to train Syrian troops on new materiel, including "sophisticated short-range air defense systems and tanks."

"The Russians say they are ready to give direct support, they're not ashamed to admit it, they consider the Syrian army and Assad to be legitimate," he said.

The build-up has prompted deep concern in Washington, with U.S. Secretary of State John Kerry calling Russian counterpart Sergei Lavrov this week to warn that Moscow's continued support for Assad "risks exacerbating and extending the conflict."

Kerry said it was also "undermining our shared goal of fighting extremism" -- highlighting the central role of the fight against IS in Syria.

Moscow has been chafing at the lukewarm reception given to its recent proposals to expand the U.S.-led coalition fighting IS to include Assad -- who Western governments have insisted must go -- and his ally Iran.

A Syrian politician close to the regime told AFP that Moscow's decision to ramp up its forces in Syria was in part prompted by its frustration over this rejection.

Alexander Golts, an independent Russian military analyst, said Moscow's move was "showing its determination and pushing its idea of a coalition."

"They are hoping to escape international isolation thanks to this coalition idea," he said. "Lavrov has already said that this proposal will be the main subject of Putin's speech at the U.N."

U.S. media reports have said President Barack Obama is considering whether to meet with Putin at the U.N. General Assembly, which the Russian leader is to address on September 28.

The two have rarely met in recent years as Russia has been increasingly isolated over the conflict in Ukraine.

Behind all of Russia's moves in Syria, analysts said, is its determination to ensure a future for Assad, who has allowed Moscow to maintain a crucial foothold in the Middle East and eastern Mediterranean.

"Putin's goal is to save Assad and every step (Russia) takes is aimed at realizing this goal," said Alexander Shumilin, the head of the Moscow-based Center for Analysis of Mideast Conflicts.

"Because if Assad falls, Russia will be excluded from the political process in the Middle East, where it has real weight as long as Assad survives," he said.

For Assad himself, Russia's increasing support will provide more than just military advantages.

Joshua Landis, a Syria expert at the University of Oklahoma, said it is likely to also boost public morale among Assad supporters in Latakia and Tartus.

The traditional homeland of Assad's Alawite sect has been under increasing pressure in recent weeks as rebels have advanced towards Latakia.

A car bombing in Latakia city earlier this month killed at least 10 people and wounded dozens more, in a rare attack in an area that has been mostly spared the ravages of Syria's conflict.

"Ordinary Alawite civilians and regime supporters may take some comfort in the knowledge that a... 'first world' military is on the ground that may help forestall possible 'ethnic cleansing' of Alawites should Assad's military fail in the long run," Landis said.

And in the worst-case scenario for Moscow, analysts said, Russian facilities would provide a crucial fall-back position for the regime or even an outlet for Assad's evacuation.