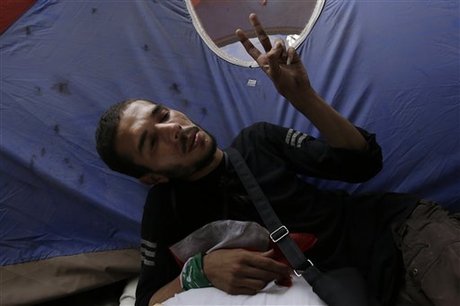 Protesters holding a sit-in near the Environment Ministry in downtown Beirut announced on Thursday an end to their hunger strike but said their tents will remain in the area.

Only one young man will continue in his hunger strike while the rest will join other activists holding street protests, he said.

“The tents will remain here as a symbol” of our protest, Suleiman added.

The young men erected tents and went on hunger strike after protesters from “You Stink” movement stormed the environment ministry earlier this month, demanding al-Mashnouq's resignation over his failure to resolve the waste crisis.

Angry protests that suddenly erupted over the government's failure to deal with the garbage crisis have evolved into the most serious anti-government demonstrations in Lebanon in years.

The protesters seek to challenge a political class that has dominated Lebanon and undermined its growth since its civil war ended in 1990.

Good work young men, you've done us a lot of pride and also now a lot of relief. Do not hunger strike for them, they are not worth it, they are not even bothered if you didn't know. The only way is to continue the pressure on them, never relent, but please, and this is a big please from the people of Lebanon, I repeat, a big please, organize yourselves into one single entity or movement, merge into one. Let's from there register a movement by name and known address, let's ask for donations that can be fully audited and traced and let's get licences for our demos. Once that's done, we should ask for the army protection, if not, let's have our own security people to root out vandals and goons, forcefully if need be, but always remaining peaceful and civilized. Will connect again.

mowaten. i want to know who pays you to post and for what reason. I find you on every article. Who pays for your internet quota? I demand answers and quickly!

you know what is strange mowaten.... I was thinking the same thing exactly, the same!!!! The similarities between us are not just coincidences anymore. I mean we are both shiaa extremists who pretend to be secular and we both are members of the shia resistance, both paid to post, both are sectarian to the bone, both troll and make up accounts to insult people and then pretend we are against such practices.... I hope just because we are similar in all the above ways people don't think we are the same poster.

why then do you keep posting on their Tueini's website mowaten, unless you are paid to do so?

mowaten
I thought i told you I'd ring you when I needed a doorknob's opinion, who let you out of your cage?

what is the point of your comment? Is it a political opinion, a comment, or just a notion at being relevant, mowaten?

Mowaten, I'm glad you left this here, because it brings nothing to the argument except to reflect the very fears of the mafias of which Hezbollah and Amal are integral part of.

lol phoenix i'm not surprised by the army of trolls' reaction, but yours is a bit disappointing :)

why the nervous laugh mowaten?

i agree and disagree with you phoenix.
I agree because yes, they must not die of hunger for the government, and certainly not over Mashnouk's resignation. This is not worth a life.
And i disagree because it is not "well done" in my opinion.
Those are methods of another age. Methods for one that cannot be heard and needs to draw some attention.
We are all focused on this problem. Hunger strike is not a powerful tool of pressure in this case.
As for their organization, yes... the problem is that these organizations do not agree between them from what i hear...they need to federate themselves more... to address the public more, to communicate better, to have one representative only, etc...

Meh I remember when I was in Lebanon and it was Ramadan I was in place in dahieh, at a famous fast food place, I believe it was called abu ali falafel, but not sure, anyways. I am sure it was in dahieh because there were so many shia mosques. I was eating that tutifruity and falafel sandwich and the shias were looking at me with anger, until one guy came, told me something in Farsi Arabic "Allah Akbar, Labayka Ya Nassrallah or something Labayka Ya Hussein", and tried to take away my cup of fruits and the falafel sandwich. Until a police or army some security guy, told the fanatic to back off.

Noooooo why? Well it might that Shawarma sandwich every one is dreaming with .... mmm mmm mmm
I know it is a lost cause.

Hi Patriot, thank you for a good input, and yes, I also agree with your thoughts, thanks again mate, cheers.