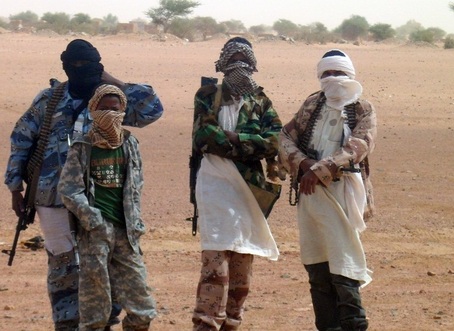 The two groups accused each other of starting the fighting, breaching a peace deal signed by the governmental camp on May 15 and the rebels on June 20.

"Since this morning we have been seeing a new violation of the ceasefire," a source in MINUSMA, the United Nations peacekeeping mission in the west African country, told AFP.

"The Coordination of Azawad Movements (CMA) and the Imghad and Allies Tuareg Self-Defense Group (GATIA) clashed around 10 kilometers (six miles) from the town of In Khalil, north of Tessalit."

Neither the U.N. source nor top officials from the two sides were able to provide information on deaths or injuries.

"For several days, in violation of the ceasefire, the GATIA troops have been closing in on our positions in In Khalil," said Almou Ag Mohamed, a spokesman for the CMA, a rebel coalition until it agreed on the peace deal.

"After several warnings, we were forced to militarily defend our positions and fighting broke out."

Ali Ould Mohamed, of the loyalist GATIA force, told AFP its fighters were attacked "and are currently fighting."

The Platform coalition of loyalist fighters -- of which GATIA is a member -- seized the town of Anefis, about 120 kilometers (75 miles) south of Kidal, in deadly clashes in August that left at least 10 dead.

They agreed to pull out however and MINUSMA welcomed the completion of their withdrawal on Monday.

Mali was shaken by a coup in 2012 that cleared the way for Tuareg separatists to seize towns and cities of the north, an expanse of desert the size of Texas.

Al-Qaida-linked militants then overpowered the Tuareg, taking control of the region for nearly 10 months until they were ousted in a French-led military offensive.

The vast desert region is now controlled by a patchwork of armed groups, loyal to the government or the Tuareg-led former rebels.

U.N. peacekeepers set up a 20-kilometer "security zone" around Kidal a month ago after days of deadly clashes between rival armed groups.

MINUSMA, is hoping to prevent fighting from spreading to the strategic town, 1,500 kilometers (750 miles) northeast of the capital Bamako.