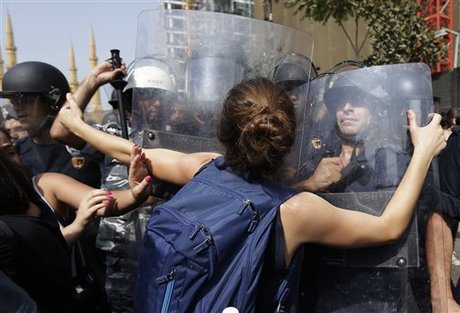 Interior Minister Nouhad al-Mashnouq reiterated that his resignation is pointless, pledging to protect “peaceful” demonstrators during an anti-government march planned for Sunday.

Al-Mashnouq expressed willingness to resign in “defense of freedom of expression and peaceful assembly, or if his resignation would guarantee in solving the country's problem.”

“But I don't think that there is a need to do so,” al-Mashnouq told As Safir daily on Friday, a day after the so-called follow-up committee of the popular protest movement called for the resignation of the interior and environment ministers over alleged police violence and the failure to resolve the country's trash crisis.

The committee also said that it will organize a march on Sunday from Bourj Hammoud to central Beirut's al-Nejmeh Square.

It called for the release of all those arrested in connection with the August 22, 23 and 29 demonstrations held against the political class that has dominated the country and undermined its growth since the civil war ended in 1990.

Al-Mashnouq said that it is the responsibility of the security forces to protect the demonstrators who are peacefully expressing their viewpoints.

“It is their legal duty to do. But it is illegal to damage state and private property,” the minister told As Safir.

Al-Mashnouq slammed the demonstrators for asking the police to protect them and at the same time resorting to their assault and cursing them.

“Some of the things being said to the security forces are shameful,” he said.

On Wednesday, police beat back protesters with clubs and sticks after they were instigated by remarks made by them, and arrested dozens of people in downtown Beirut.

The small group of activists had gathered near the parliament building, where a national dialogue meeting was taking place.

FT, cultural.enrichment.officer, weather.bro, fi.pghobleme , mowaten, and I are the 6 most liked, most voted and most informative posters on naharnet by 6 country miles. No wonder our comments are always in the VIP section of the top rated comments.

Hello lebjack
I like to introduce myself. I am a very close friend of flamethrower. I post, vote, and mass report on his behalf whenever he asks me to. If you have any questions regarding this matter, please contact flamethrower directly. Now, I have a very simple question for you: Do you know why my friend flamethrower was banned and treated like a diseased leper?

'I Love You' Last Words of Mexican Killed in Egypt Attack
http://www.naharnet.com/stories/en/190037-i-love-you-last-words-of-mexican-killed-in-egypt-attack

will somebody post please, so i can troll them!

Naharnet... please do something about all those spammers and their stupid comments... they are polluting this forum.

for once i agree with you

that's the only way they found to "fight" us, poor things

Mowaten, are you talking to yourself nowadays?

@thepatriot
I like to introduce myself. I am a very close friend of mowaten. I post, vote, and mass report on his behalf whenever he asks me to. If you have any questions regarding this matter, please contact mowaten directly.

I how come there were almost as many injured security personnel as demonstrators in these peaceful demonstrators?

This used to be a nice forum where you could actually discuss issues. Now it's just spam bots calling others trolls.

when did you ever discuss anything?
milk is not always white

you have to thank mowaten, flamethrower and the_roar for that.

it seems you are not capable of any comments. Do you just vote?

he can't comment, his mouth is always full as he fully admits by his chosen username

When people say we want neither M14 nor M8, they are perfectly right. Nabih Berri sends in his thugs to cause havoc, then orders his uniformed men in the ISF to use maximum force to disperse the protesters who are in turn accused of violence. Mr. Mashnouq who is part of the cake-sharers in the government and parliament orders the ISF to do as Berri ordered, use maximum force to dissuade protesters. M14 and M8 are there for the party, caviar, cigars and cognac are habits difficult to kick off, then here come these disturbing youth wanting to remove them from the enjoyment. Try as they may, change is happening.