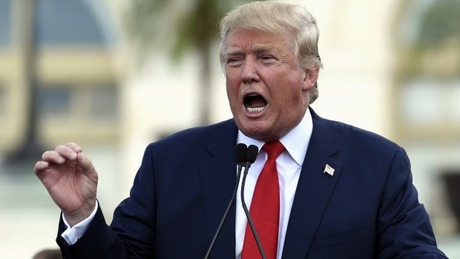 Republican presidential frontrunner Donald Trump said Saturday he was not morally obligated to defend Barack Obama after he let pass unchallenged a questioner's assertion that the U.S. leader is a Muslim.

But while striking a different tone later in the day, the bombastic businessman acknowledged that he would have "no problem" with appointing a Muslim American to his cabinet if he were elected.

In a rapid-fire series of tweets, thebillionaire real estate mogul responded to a barrage of criticism of his handling of the Thursday incident, which came from Democrats and one fellow Republican candidate, New Jersey Governor Chris Christie.

"Am I morally obligated to defend the president every time somebody says something bad or controversial about him? I don't think so!" Trump wrote, ending an unusually long period of silence after he was largely quiet on Friday.

Trump, who helped fuel a "birther" movement in 2011 by repeatedly demanding Obama prove he wasn't born in Kenya, appeared to encourage a man at a campaign stop in New Hampshire Thursday after he made the incorrect assertion about Obama's faith.

"We have a problem in this country, it's called Muslims. We know our current president is one, you know he's not even an American," the unidentified questioner said.

Trump chuckled and interrupted him to say, "We need this question. This is the first question."

Putting himself in Trump's shoes, Christie said he would have corrected the questioner and said: "No, the president's a Christian and he was born in this country."

Hillary Clinton, the leading Democratic candidate, called Trump's handling of the incident "disturbing and just plain wrong," while White House spokesman Josh Earnest said it was no surprise because "the people who hold these views are part of Mr Trump's base."

Trump cancelled a campaign stop in South Carolina Friday after the flap broke.

But on Saturday Trump did not back down, saying it was the first time in his life he had caused a controversy "by NOT saying something."

"If someone made a nasty or controversial statement about me to the president, do you really think he would come to my rescue? No chance!" he tweeted.

"If I would have challenged the man, the media would have accused me of interfering with that man's right of free speech. A no win situation!"

Later, at a forum in Des Moines, Iowa featuring several Republican presidential candidates, Trump kept saying he had nothing to apologize for.

"Christians, that's all of us, need support in our country. And around the world. Their religious liberty is at stake," Trump said.

The belief that Obama is a Muslim is not uncommon, particularly for conservatives. A recent CNN/ORC poll found that 29 percent of Americans believe it. Among Republicans, the figure rises to 43 percent.

At a second Iowa event, a speech to students and supporters at a high school in Urbandale, Trump was asked whether he would consider appointing a Muslim American in his cabinet.

The candidate said he would have "absolutely no problem with it."

Trump at one point chuckled at the notion that he was now a politician, defensively stressing that he has only been at it "for three months."

During that time, particularly after the first Republican debate on August 6, he has been called out for his condescending and disparaging remarks about women.

At the Urbandale event, where senior students were dressed up for their Homecoming dance later Saturday night, Trump insisted women are "far superior to men," adding that "I cherish women, and they are the greatest."