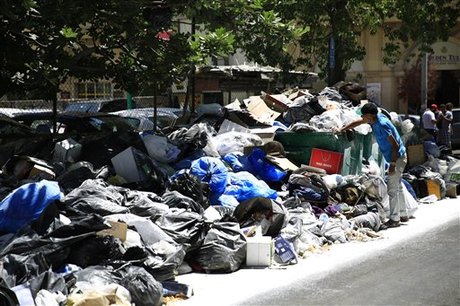 Agriculture Minister Akram Shehayyeb said Wednesday that his waste management plan is on the right track of implementation to resolve the country’s two-month garbage crisis.

“Preparations for the implementation of the plan are ongoing and the work is serious,” Shehayyeb told al-Joumhouria newspaper. “It has become closer to reality.”

“We found a landfill on the eastern mountain range and we are working with the army and officials in the area” to strike a deal on its functioning, he said.

Preparations have also been made for the operation of the Srar landfill in the northern district of Akkar, he added.

Later on Tuesday, Shehayyeb announced that "there is no alternative to resolve the garbage crisis other than the participatory solution that we have reached."

"We're seeking to overcome all obstacles," he said, following a meeting with Interior Minister Nouhad al-Mashnouq.

He noted that the attempt to reopen the controversial Naameh landfill is aimed at dumping "around 50,000 tons of waste of which 10,000 are burnt."

He was referring to trash that has been accumulating on the sides of the streets and in random sites in Beirut and Mount Lebanon since the July 17 closure of the landfill.

"We know that there are voices that have objected against the reopening of the Naameh landfill for 7 days but the municipalities' stance was clear," he added, in response to a reporter's question.

"The waste management plan is a victory for the popular protest movement and had it not been for them, the file would not have reached any solutions," he noted.

Meanwhile, the Campaign for the Closure of the Naameh Landfill held a new sit-in outside the site and reiterated its rejection of any reopening of the landfill, citing health and environmental risks.

The waste crisis erupted in July when Lebanon's largest landfill in Naameh was closed.

Trash began piling up on the streets of Beirut and Mount Lebanon, forcing the dumping of waste in makeshift sites and along the banks of rivers.

After the pressure exerted by civil society activists through a series of anti-government protests, Shehayyeb came up with a plan last month to dump the trash of Beirut and Mount Lebanon in several landfills across Lebanon.

He has since been holding consultations with activists and locals to approve the plan.

sure, the closer Rukouz gets to his promotion (orchestrated by Jumblatt) the closer the waste disposal plan gets to implementation.

hi exfpm
I like to introduce myself. I am another form of flamethrower. I post, vote, and mass report whenever i feel like it. If you have any questions or concerns please contact flamethrower directly on his private extension.

helli ex-fpm
I like to introduce myself. I am another form of the_roar. I post, vote, and mass report whenever i feel like it. If you have any questions or concerns please contact the_roar directly on his private extension in Nabatiyeh, Australia.

Flamethrower, mowaten, southern and I are the 4 most loved, most respected, most voted, and most informative posters on naharnet by 4.6 country miles. No wonder our comments are always in the VIP section of the top rated comments..... No Wonder!

When you boil the water out of the pan, even if you think Aoun or Nassrallah are corrupt and horrible men, what they are proposing is the only way forward at this point or else you will face Civil War.

The rain that came on Sunday night to Monday is an ominous sign that we can no longer go round and around the bush. The trash issue is much too serious to be treated like any mundane political issue to opposes M8 to M14. Lebanon needs a national solution to this growing threat if it wants to avert something truly major, one of them an outbreak of cholera and more. The existing dump sites should be used whilst a durable solution is found, therefore the people blocking the roads to them are now doing it to cause this problem going out of hand. Yes, we all understand their concerns, but Shehayeb has already done quite a commendable job to help find solutions, we are all already behind time, if we want to avert the very worst, Lebanon already stinks bad as it is and it will get much much worse soon if we keep messing around.