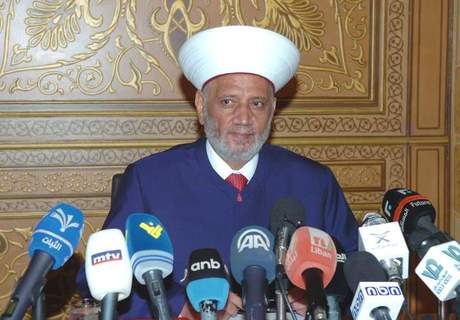 “Political crises are increasing, institutions are getting paralyzed and the presidential elections are not being held,” said Daryan in his sermon at Mohammed al-Amin Mosque in downtown Beirut.

“We are all concerned on the nation, the state and the Republic,” said Daryan.

He called for “preserving legitimacy,” saying “solutions can only come through the constitution, consensus among all Lebanese, and coexistence.”

“Solutions should also come through dialogue and consensus through the state institutions, the government and the parliament,” he stated.

Daryan called for the election of a president also through consensus, describing him as “the symbol of the nation's unity.”

“The situation will only improve through his presence,” said the Mufti.

“Things will get straight only through dialogue and by distancing ourselves from violent rhetoric that is leading to more differences in our community,” he said.

Daryan also called for backing the government and “not to do injustice to it.”

“Action is needed to stop the assaults on it, on Jerusalem and Palestine,” he said.

Israeli police said they raided the Al-Aqsa compound to stop youths who had barricaded themselves inside the mosque from disrupting visits by Jews and tourists.

Clashes broke out during the raids, with protesters throwing fireworks, stones and other objects at police, who fired stun grenades.

In his sermon, the deputy head of the Higher Shiite Islamic Council, Sheikh Abdul Amir Qabalan, also called for the election of a consensual president.

He urged the Lebanese to be united and said officials should stand together against Israel and corruption.

KSA got to him just like they got to Bchara el Rahi!

Wise words Mufti Darian, may I also join in wishing you Eid mubarak. But I also need to tell you that I accpt your reasoning, yet we all know that the main obstacle to all progress in Lebanon is Hezbollah under its leader Hassan Nasrallah and his lackey Michel Aoun. It's not only about Aoun's obstinate blindness and madness to acquire the presidency but more so about Nasrallah's wish to have a pliant slave there to rubber stamp all of his plans under the dictates of Tehran and Damascus. They have weapons, they have TV stations and radio and media, and the army still hesitates. I am afraid that it it will a lot more than calls and pleas to change their stances.

@phoenix1 You cannot be more correct. And also in your estimation that it will take more than just "calls and pleas" to make a change of stance with Hezbollah and its lackey.
There must be a recognition that there has been conducted against the Government a coup. It has been slow moving and gradual, but it is now nearly complete with legitimacy hanging on barely. It is time for the Lebanese Army to take up its responsibility and to change the course of the Hezbollah coup, to occupy the government buildings, to arrest and bring to the Parliament House all of the Members, lock the doors and not let them out until they have voted a new president into office. If the Army does not act, there is no one to act for the People of Lebanon to end this drift of the Republic into Hezbollistan.

Perfectly said Beiruti, I fully subscribe to your views, thanks.