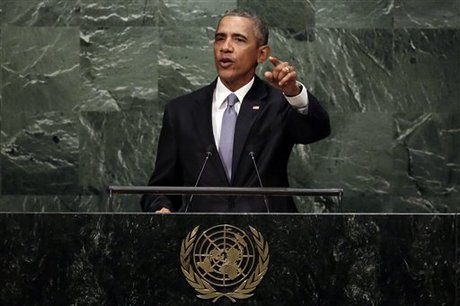 U.S. President Barack Obama on Monday took a swipe at Russia and Iran for backing what he called "tyrants" like Syria's Bashar Assad but declared in his address to the United Nations that he was ready to work with them to end the conflict.

Obama took the podium at the U.N. General Assembly ahead of President Vladimir Putin and Iranian leader Hassan Rouhani, with the spotlight firmly on ending the carnage in Syria.

"The United States is prepared to work with any nation, including Russia and Iran, to resolve the conflict," the U.S. president said.

Obama argued it would be wrong to support a "tyrant" like Assad, "who drops barrel bombs to massacre innocent children" and challenged the view that the alternative would be "surely worse."

Washington has insisted that Assad must leave power as a pre-requisite for any settlement to the conflict, while European powers have softened their stance, signalling he could stay on in an interim role.

In his address, Obama did not specifically address Assad's fate, a key bone of contention in efforts to re-launch a bid to end a war that has left more than 240,000 dead since 2011.

But he declared that there could be no return to the pre-war status quo, when Assad held sway.

The world's largest diplomatic gathering was shaping up as a showdown between Obama and Putin over fighting the Islamic State in Syria and pushing for regime change in Damascus.

Moscow has put Washington on the back foot by dispatching troops and aircraft to the war-torn country and pushing reluctant world leaders to admit that Assad could cling to power.

The Kremlin strongman called in an interview ahead of the U.N. summit for "a common platform for collective action" against Islamic State jihadists that would supersede a U.S.-led coalition and involve Assad's forces.

On the ground, Russia seems to have already started putting the pieces together by agreeing with Iraq, Syria and Iran that their officers will work together in Baghdad to share intelligence on IS.

Western powers say Assad's military is responsible for the vast majority of deaths in the war and maintain his brutal rule has allowed the Islamic State's extremist views to flourish.

"When a dictator slaughters tens of thousands of his own people, that is not just a matter of one nation's internal affairs. It breeds human suffering on an order of magnitude that affects us all," Obama said Monday.

But with their response to IS in disarray, Western powers have let the Syrian president's backers present him as the only option and pushed calls for the priority to shift to fighting the jihadists.

"If we are to succeed in fighting terrorism, the government in Damascus cannot be weakened. It must be able to carry on the fight," Rouhani told a gathering of academics and journalists on Sunday.

"If the Syrian government is taken out of the equation, the terrorists will enter Damascus" and "the whole country will become controlled territory, a safe haven for terrorists," he said.

While the duel between Putin and Obama looks set to hog the limelight, there are a string of other eye-catching subplots on what will be a frantic day of diplomacy in New York.

Rouhani will take to the podium for the first time since Tehran edged in from the cold with the signing of a key deal with world powers over its nuclear program in July that will see sanctions eased.

France's Francois Hollande will also address world leaders a day after his fighter jets carried out their first strikes against IS jihadists in Syria.

China's Xi Jinping made his first UN address after a tour of the US that saw Washington and Beijing struggle to shake off mutual suspicions by trying to curb fears of cyber spying.

And U.N. member states will for the first time hear Cuban President Raul Castro and Nigerian leader Muhammadu Buhari, who won elections in March with a vow to defeat Boko Haram Islamists.

Obama argued it would be wrong to support a "tyrant" like Assad, "who drops barrel bombs to massacre innocent children".

Obama does not know what he is talking about. Mowaten assured us there were no barrel bombs and the pictures of dying women and children are all photoshop.

"_mowaten_
i dont think it's actual "barrels", more like barrel-shaped maybe.. and the "barrel bomb" name was coined by rebels for added mediatic effect"

assad is not a tyrant for M8ers: he is a democrat who loves his people so much that he cannot help torturing and killing all those who does not want his love....

@eagle according to the idiots, if it's not an actual barrel shape bombs, then ASSad is not throwing it.

"Tyrants like Assad" sounds pretty hollow when the Americans bow to the Saudis and prop up Sisi.

We agree with bigjohn

true bigjohn the usa supported and still supports dictators around the world. BUT here the issue is that assad deliberately killed his OWN people whereas the USA have not killed thousands of their own people...
still M8ers love to support a dictator even if he harmed hundreds of lebanese , they don't care as long as those lebanese were against their beloved dictator....

bigjohn: give us the example of ONE powerful country in the world that does not support any dictators?

all dictators have in common the killing of their OWN peole, but it seems right to you, whereas those supporting dictators is not right...killing your own people seems ok by your standards...

pityful you are in your reasoning....

Lool, yes, the Saudis didn't kill anyone, not in Yemen either. And yes, if the terrorists in Egypt got as much support as those in Syria, you can be sure many more would have died there.

Please, for God's Sake stop pretending you know something about nothing. You can barely read or write let alone make a political argument!

does it mean that assad is not a tyrant in your eyes and shouldn't be ousted?
has Obama killed 200000 americans in 4 years? has he tortured thousands of americans?
your beloved assad has killed his OWN people and still is killing innocent victims.... but still you support that dictator. pityful hezbi lover you are...

good you cannot even admit that assad is a tyrant and a cruel one towards his own people... good boy to support such a regime. pityful boy....

is he or is he not a tyrant? even a simple question you cannot answer? or does it hurt you to answer it?

and by saying that assad is a tyrant you equate it to covering isis and the islamists...when i never ever said i was with those savages...
really you are a very stupid person southern boy....

15 Civilians Dead in Syria Regime Raids on IS-held City
Fifteen civilians, including five children, were killed in regime air raids on a popular market in a jihadist-held city of eastern Syria on Monday, a monitoring group said.
http://www.naharnet.com/stories/en/190785-15-civilians-dead-in-syria-regime-raids-on-is-held-city

you nailed him texas!

pityful M8ers... ALL in denial... to avoid their embarrasing support to a tyrant and a butcher they deflect the question by pinpointing others..

it also show us that they are cowards who cannot assume their support to this barbaric regime and forget how cruel they were towards lebanese... but then again coming from people who thanked this regime no wonder...
pityful cowards they are....

can any M8er assume their choice and agree that assad regime are bloodthirsty tyrants ruling just to stay in power? or do they see it as a democratic regime where freedom existed for decades?

sure for narrow minded people like you it is assad or nothing... those against assad mean they are for the islamists, typical baathist talk... but there is a solution without your beloved assad and without the islamists but sure it is bad for your business.

we know the song but keep playing it you are an entertaining clown here...

Ignorant to the bone you're.

What happens when The Shame and Deformed block contract a disease that forces them to tell the truth?

@texas you got him nicely! @southern you must either watch the Iranian news or the Syrian news both of which are controlled by the governments. Both of whom are one sided. And share one view. What about citizens of Syria? Do they not have a say? Or are they not humans to you?

Obama is a "retrenchment" President, and he never had, nor has now, the the intention and/or the commitment to trench the U.S. into another war. Historically, for the U.S., abandoning a war and political activism go hand in hand. The question is whether Obama and/or his Administration occupy a position of strength to negotiate with Putin.

I am sorry... but before i think about the Syrian tragedy, the Palestinian tragedy, i think of Lebanon FIRST!
How can any descent Lebanese citizen support a Dynasty (Assad) that only brought us Death, robbery, assassinations, torture, misery...They humiliated us, treated us like a secondary Syrian province, made the law here, with their Beaurivage and their Anjar!
I will never forget what the Assads put us through, and are still putting us through... never!

@john
good
But everything is not about what you say. There are other people on this forum as well.

The lesser of 2 evils you say... maybe. But until now, those isis or daech crazies have not harmed me... well... nothing compared to what the Assads did to us anyway.
Do not forget that it is Hezbollah who engaged them first! In Syria!
If they seek for retaliation, it will be Ebola's entire responsibility! They are defending the Assad regime under the pretext of protecting Lebanon. Just like israel was in Lebanon under the pretext of protecting Israel!
So! What is legitimate... and what is not johnny?

Ps: Like i said, I do not care for Palestine, Syria, or any other rutheless tyrant as long as he does not harm me or my country. We have enough problems already... there is plenty of evil, the US does a lot of evil as well, many major mistakes, all this is an evidence to me. Saudi Arabia is a filthy country, where the masses are kept in dark ages, and it is not an exemplary country for us. There is a difference between having allied countries, and between adopting a foreign ideology. Which is the case for Ebola and Iran. Not the case for m14 & KSA. Do not mix up everything.