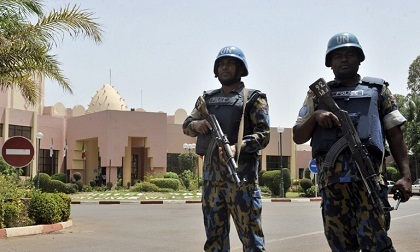 The U.N. peacekeeping mission in Mali is one of the deadliest missions in the history of the U.N. blue helmets, with 60 deaths, Stockholm research institute Sipri said Monday.

In its report "Fatality Trends in U.N. Peace Operations", the Stockholm  International Peace Research Institute (Sipri) said a total of 1,938 U.N. soldiers had been killed since the first U.N. peacekeeping mission in the Middle East in 1948, but almost three-quarters of those were due to accidents or were natural deaths.

The highest mortality rates took place in the 1990s with two very small missions in Tajikistan and Georgia, which had three and eight deaths respectively.

The 8,400-strong Minusma mission in Mali, with 60 deaths including 40 violent ones, had the fourth-highest mortality rate, making it "one of the most deadly U.N. peacekeeping operations ever," Sipri said.

According to the report's authors, Mali is one of the missions where U.N. troops "have been attacked by violent extremist groups ... and deployed to areas in which there is little or no peace to keep."

"Many peacekeepers that have been killed in Mali died in several multicasualty incidents, often involving improvised road bombs or targeted attacks. These types of asymmetric attacks against U.N. peacekeepers are a relatively novel development, and the experience of Minusma underscores that the U.N. has found it difficult to adapt to these new kinds of threats," the report said.