Man Arrested for Fighting with Army in 2013 Abra Battles 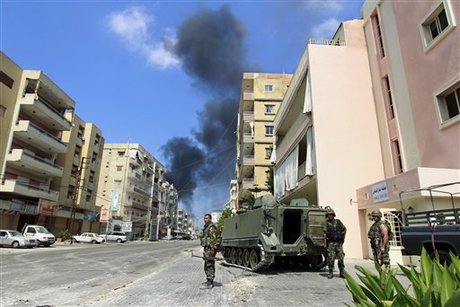 The Lebanese army said it has arrested a man suspected of involvement in clashes with the military in a suburb of the southern city of Sidon two years ago.

The military said in a communique that an “army unit arrested Firas Abdul Latif Hakawati in Sidon for participating in the fighting with the army during the Abra events in 2013.”

The detainee was referred to the appropriate authorities for questioning, it said.

The armed supporters of Sheikh Ahmed al-Asir, a firebrand anti-Hizbullah cleric, clashed with the Lebanese army in Abra in June 2013 after they opened fire on a military checkpoint.

Al-Asir, who had been on the run since the battles, was arrested last month at Beirut's Rafik Hariri International Airport while trying to travel to Nigeria via Cairo with a fake Palestinian passport.

Earlier this month, the military court postponed his trial to October 20 upon the request of defense lawyers.

Innocent until proven guilty unless he is a Sunni. By the sound of his name he appears to be Sunni. Hence and therefore he is guilty.

that is a despicable comment mowaten! You should be ashamed of yourself. Just because you believe he is of a certain sect, it does not mean he is automatically guilty!

troll having a monologue under fake names.. fascinating what idleness can make hasbara trolls do