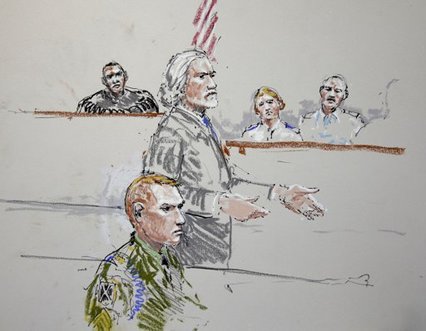 The ringleader of a rogue U.S. army unit accused of killing Afghan civilians for sport treated the locals like "savages," a court martial heard Monday.

The so-called "kill team" led by Staff Sergeant Calvin Gibbs was "out of control," prosecutors added as grisly photos of soldiers posing with a corpse were shown in court.

Gibbs faces life in prison if convicted on charges including three counts of premeditated murder, in a scandal that has threatened Abu Ghraib-style embarrassment for the U.S. military.

Gibbs, the fourth member of the rogue unit to face court martial, is accused of staging killings between January and May 2010 to make them look like legitimate combat casualties.

Jeremy Morlock, described as Gibbs' "right hand man," said his 26-year-old former boss had frequent conversations about "drop weapons," or weapons found on the battlefield which could be planted on a body.

"He had a general disdain for Afghans, and called them savages," Morlock -- who agreed to testify against Gibbs as part of a deal in which he pled guilty in March -- told the court martial, expected to last a week.

Morlock told how Gibbs took over the platoon, stationed in volatile Kandahar province in southern Afghanistan, in November 2009, after its previous leader suffered serious injuries in a roadside bomb attack.

"We talked about payback," Morlock said, adding that the first "opportunity" took place on January 15, 2010 during a patrol of a village called La Mohammad Kalay.

Morlock said he and another soldier, Private Andrew Holmes, came across a teenage farmer, alone in a field. They waved him to come close and the young man obeyed.

"They're pretty compliant when dealing with us," Morlock said, explaining how he then used a grenade to kill the Afghan youth, after which Holmes opened fire to make it look like a legitimate firefight.

"We thought it was an OK idea to do this," Morlock said, adding that after the killing there was a celebratory mood in the platoon, with lots of "high fiving."

Photographs of the boy's bloody corpse were shown to the jurors, a five-member military panel. One of the pictures showed Morlock posing with the lifeless body.

Asked what the purpose was of taking the photo, Morlock said: "It was a keepsake kind of thing." The photo also revealed that on one of the boy's hands the little finger was missing.

Morlock testified that Gibbs gave the severed finger to Holmes.

Gibbs' court martial opened last Friday with jury selection, after which Gibbs' lawyers entered not guilty pleas to all 16 charges at Joint Base Lewis-McChord, south of Seattle, home to the 5th Stryker Brigade.

In his opening statement Monday, military prosecutor Dan Mazzone said: "You're going to learn that this platoon (was) out of control."

The prosecutor told how, in March 2010, Gibbs saw two Afghan men who he claims were carrying rocket-propelled grenade (RPGs) launchers, when in fact it was a shovel.

Gibbs, the prosecutor said, ordered his soldiers to shoot them, but the Afghans managed to flee, to which Gibbs said: "Looks like we're going to have to work on our target practice."

Inside the tiny courtroom Gibbs, wearing a dress uniform, sat silent and expressionless.

Three of the other "kill-team" members have agreed to testify against Gibbs: Morlock, Specialist Adam Winfield -- as part of plea deals with prosecutors -- and Specialist Michael Wagnon.

In March, Morlock, 23, was jailed for 24 years and dishonorably discharged. In August, Winfield, 23, was sentenced to three years in prison, and in September, Holmes, 21, was jailed for seven years.