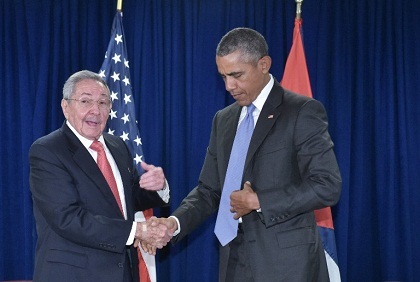 President Barack Obama met his Cuban counterpart Raul Castro on Tuesday at the United Nations -- all smiles after both renewed their calls for an end to the U.S. trade embargo against Havana.

The leaders of the former Cold War rivals shook hands at the start of what was their second meeting, after an historic encounter in April at the Summit of the Americas in Panama.

Close neighbors but long-time foes, the United States and Cuba restored diplomatic ties in July after a five-decade stand-off, and now must turn their attention to economic relations.

The two countries have reopened their embassies in each other's capitals and are engaged in a dialogue to resolve their remaining political differences, but U.S. trade sanctions remain.

Obama's White House wants to lift the embargo, which prevents almost all trade across the Florida Straits, but conservatives in the U.S. Congress are not ready to forgive the communist island.

After the meeting, the White House said the leaders had discussed the visit last week of Pope Francis, who helped mediate closer U.S.-Cuba ties, to both countries.

And Obama highlighted that, even if the embargo remains, recent US regulatory changes that did not need Congressional approval would allow more Americans to travel and do business in Cuba.

The White House said these reforms would help Cuba more if they were accompanied by measures from Havana to open its economy.

"The president also highlighted steps the United States intends to take to improve ties between the American and Cuban peoples, and reiterated our support for human rights in Cuba," it said.

On Monday, during a speech to the U.N. General Assembly, Obama said he was confident Congress would "inevitably lift an embargo that should not be in place anymore."

"For 50 years, the United States pursued a Cuba policy that failed to improve the lives of the Cuban people," he admitted, to applause, in his address to fellow world leaders.

"We changed that. We continue to have differences with the Cuban government. We will continue to stand up for human rights.

"But we address these issues through diplomatic relations, and increased commerce, and people-to-people ties."

Castro, the 84-year-old veteran revolutionary who succeeded his brother Fidel in 2006, made his first address to the Assembly on Monday, a few hours after Obama took the podium.

"Now, a long and complex process begins towards the normalization of relations, but this will only be achieved with the end of the economic, commercial and financial blockade," he said.

At a U.N. development summit on Saturday, Castro called the embargo the "main obstacle" to his country's economic development.

Next month, the General Assembly will discuss a new draft resolution condemning the U.S. embargo against Cuba.

The assembly has voted each year since 1982 to approve a resolution calling on the United States to lift the embargo.

Obama, in his address, predicted a better future for the island.

"Change won't come overnight to Cuba, but I'm confident that openness, not coercion, will support the reforms and better the life the Cuban people deserve," he said.

Many U.S. Republicans oppose lifting the embargo, arguing that Cuba is still a one-party state with no respect for human rights and must do more to enshrine freedoms before coming in from the cold.

But there are also skeptics about the rapprochement in Havana, notably Raul's iconic predecessor and brother Fidel Castro, who has warned his compatriots not to trust American generosity.

In particular, he alleges the United States owes Cuba compensation for the damage that sanctions did to the island economy, running into "many millions of dollars."

The U.S. side may also have a claim for compensation for U.S.-owned property, such as real estate, that was confiscated when Castro took power.