Obama Says Defeating IS 'Requires a New Leader' in Syria 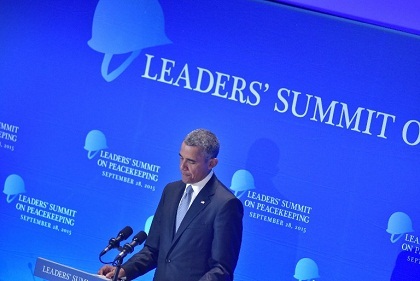 U.S. President Barack Obama said Tuesday that defeating the Islamic State group in Syria will only be possible if Bashar Assad leaves power, a day after a clash with Russia over the Syrian president's fate.

"In Syria (...) defeating ISIL requires, I believe, a new leader," Obama told a counter-terrorism summit of some 100 leaders, held on the sidelines of the U.N. General Assembly.

Russia snubbed the summit called by the United States, sending a low-level diplomat to the meeting to take stock of the one-year campaign to defeat IS jihadists, who control large swathes of territory in Iraq and Syria.

Obama sparred with Russian President Vladimir Putin over the Syria crisis during their dueling U.N. speeches on Monday, but the leaders agreed to work together to try to end the four-year war that has killed more than 240,000 people.

Assad's fate is the key bone of contention between Washington and the Syrian leader's Russian and Iranian allies.

After sending troops and fighter planes to Syria, Putin on Monday called for a "broad coalition" to defeat the jihadists and warned it would be an "enormous mistake" to sideline Assad's military from the fight.

Obama said the United States was ready to work with Russia and Iran to "find a political mechanism in which it is possible to begin a transition process."

The United States has long insisted that Assad must leave power, but Obama did not specify in his remarks whether the Syrian leader could take part in a transition in an interim role.

The counter-terrorism summit takes place a year after Obama stole the limelight at the last U.N. gathering when he vowed to crush IS and called on countries to join the United States in the campaign.

Taking stock of the campaign, Obama said IS had lost a third of the territory it controlled in Iraq and had been "cut off" from almost all of Turkey's border region.

But he added that military action alone would not succeed and that the coalition must address the conditions that allow Islamic radicalism to thrive.