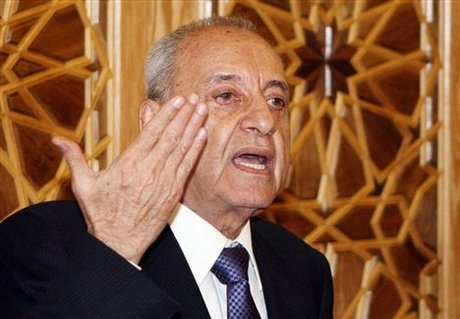 Speaker Nabih Berri has mockingly said that he was on the verge of joining civil society activists in anti-government demonstrations sparked by the garbage crisis.

In remarks to his visitors, Berri said: “Let no one talk to me about any issue before we settle the waste crisis.”

“I am on the verge of resorting to the street to join the movements,” he said in reference to civil society groups that have been holding protests since the Naameh landfill that lies south of Beirut was closed in July.

“What we're seeing is unacceptable. Where are we heading?” asked Berri, whose remarks were published in local newspapers on Wednesday.

“Is it possible for the state not to have a single piece of land to dump the waste there?” he wondered.

“Enough negotiations on the issue of garbage,” Berri said.

Agriculture Minister Akram Shehayyeb, who has taken over the file from the environment minister, has been holding talks with civil society representatives and officials from different areas to get the approval on his waste management plan.

Earlier this month, the cabinet approved the plan under which the trash that has been dumped in makeshift areas would be moved to the Naameh landfill, which will open for only seven days, and fresh waste would be taken to four other locations in the eastern Bekaa Valley, the northern Akkar district, Bourj Hammoud near Beirut and a waste processing facility in the southern city of Sidon.

Shehayyeb said that the plan could be implemented within the next 24 hours.

He made the announcement following talks with environmentalists and civil society representatives that ended late Tuesday.

But enough from this civil society blocking every move to resolve the garbage issue! All Lebanon , especially the mountains where all the water infiltrate the in deep soil has become trash landfill!

There is absolutely no harm using the Akkar plot or Masnaa plot?
Yes we need to recycle and eliminate all waste but something now must be put on track...

A nation mired in incompetence. Maybe Berri who has been speaker for an eternity can tell us why the garbage situation is so dire. After all he and his cohorts have robbed the state clean from all of its resources and continues to do so.

Good one esteez Nabih but be careful you don't get shot by the ex Amal thugs you've hired as Parliament guards or get beat up bythe bee2at al 7adinat thugs who might disprove of a picture of their anointed leader you're holding up.