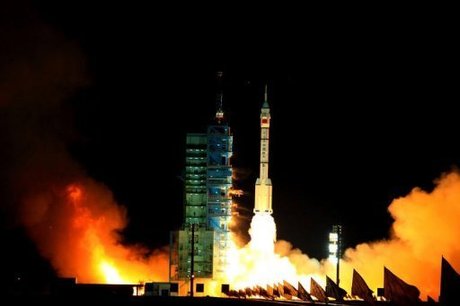 China said it successfully launched an unmanned spacecraft on Tuesday to carry out a key docking mission, taking its next step towards the goal of building its first space station by 2020.

The Shenzhou VIII blasted off from the Gobi desert in China's northwest at 5:58 am (2158 GMT) before separating from its carrier rocket about 200 kilometers (120 miles) above the Earth, the state Xinhua news agency said.

It is due to join with the Tiangong-1 or "Heavenly Palace" experimental module in two days, in what would be the country's first space docking -- a key step in China's ambitious space program.

The ability to dock successfully is crucial to the success of China's plans to build a space station where astronauts can live for several months, as they do on the International Space Station.

The technology is hard to master because the two vessels, placed in the same orbit and revolving around Earth at 28,000 kilometers per hour, must come together progressively to avoid destroying each other.

China sees its space program as a symbol of its global stature, growing technical expertise, and the Communist Party's success in turning around the fortunes of the once poverty-stricken nation.

It began its manned spaceflight program in 1990 after buying Russian technology and in 2003 became the third country to send humans into space, after the former Soviet Union and the United States.

The launch of Tiangong-1 on September 29 -- ahead of China's National Day on October 1 -- was attended by Premier Wen Jiabao, while President Hu Jintao watched from a space flight control center in Beijing.

But Beijing is playing catch-up in the space arena. The planned space docking will only emulate what the Americans and Russians achieved in the 1960s.

The Global Times newspaper said the benefits of China's investment in space technology were not yet clear, but that the country had "no choice" other than to pursue its exploration program.

"As long as we are determined to rise in the world and pursue rejuvenation, we need to take risks. Otherwise China will be a nation with prosperity but subordinated to top powers," it said in an editorial on Tuesday.

But it called for a "well-balanced" approach to space exploration, saying the money spent might be more urgently needed elsewhere in China, where the World Bank says 150 million people are still living on less than $1.25 a day.

Xinhua said the docking would take place 343 kilometers above the surface of the Earth. The spacecraft will return to Earth after two docking operations.

If it is a success, China will launch another two spacecraft next year to conduct more docking experiments.

At least one will be manned, and two female astronauts are among those being trained for the mission, according to Xinhua. If they are chosen, they will be the first women China has sent into space.

German and Chinese scientists will conduct joint life science and gravity experiments on the Shenzhou VIII, it said.

Before 2016, China plans to launch a space laboratory and by around 2020 hopes to have a space station in orbit capable of accommodating long-term stays in space, officials have said.

China's space station will be made up of the module, two laboratories, a cargo ship and a manned rocket, with a total weight of 60 tons, compared with 137 tons for the Russian station Mir and 419 tons for the International Space Station (ISS), state media have said.

The ISS began with the launch into orbit of the first station element, a Russian-built module, in 1998. The first full-time crew arrived two years later.