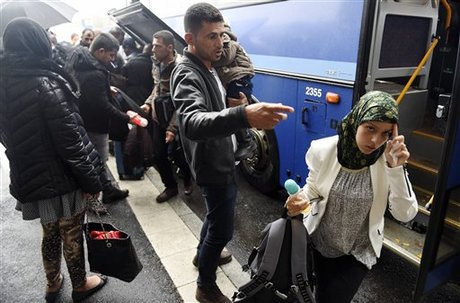 Finland on Wednesday temporarily froze its decisions on Iraqi and Somali asylum claims, to assess whether more applicants could be sent back home following a surge in arrivals from the two restive countries.

"The Finnish Immigration Service freezes its decision-making on Iraqi and Somali asylum claims for the time being. This is due to the ongoing assessment of the security situation in Iraq and Somalia," the service in charge of handling the applications said in a statement.

Finland has seen a dramatic rise in the number of mostly Iraqi and Somali asylum seekers, and the Immigration Service implied it planned to adopt a tougher line in the assessment of their applications.

"Our preliminary data on, for example, the decision practices in other EU states confirms our impression that the guidelines are to be made stricter," it wrote.

The review could lead Finland to consider that security has improved enough in southern and central Somalia and central parts of Iraq for them to be considered safe places to live.

"Now it has already emerged that asylum seekers who come from, for example, Baghdad and surrounding regions and from Mogadishu are not granted protection automatically in other EU countries," it justified.

The suspension of the asylum decisions is expected to last some weeks. The agency said it was necessary to assure "the pending applications from Iraqi and Somali nationals can be treated equally and according to the same guidelines".

Since mid-September, Finland has stepped up migrant controls on its northern border with Sweden, where most migrants cross into the country.