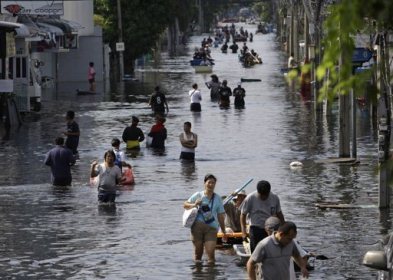 Freakish weather disasters — from the sudden October snowstorm in the Northeast U.S. to the record floods in Thailand — are striking more often. And global warming is likely to spawn more similar weather extremes at a huge cost, says a draft summary of an international climate report obtained by The Associated Press.

The final draft of the report from a panel of the world's top climate scientists paints a wild future for a world already weary of weather catastrophes costing billions of dollars. The report says costs will rise and perhaps some locations will become "increasingly marginal as places to live."

The report from the Nobel Prize-winning Intergovernmental Panel on Climate Change will be issued in a few weeks, after a meeting in Uganda. It says there is at least a 2-in-3 probability that climate extremes have already worsened because of man-made greenhouse gases.

This marks a change in climate science from focusing on subtle changes in daily average temperatures to concentrating on the harder-to-analyze freak events that grab headlines, cause economic damage and kill people. The most recent bizarre weather extreme, the pre-Halloween snowstorm, is typical of the damage climate scientists warn will occur — but it's not typical of the events they tie to global warming.

The snow-bearing Nor'easter cannot be blamed on climate change and probably isn't the type of storm that will increase with global warming, four meteorologists and climate scientists said. They agree more study is needed. But experts on extreme storms have focused more closely on the increasing numbers of super-heavy rainstorms, not snow, NASA climate scientist Gavin Schmidt said.

The opposite kind of disaster — the drought in Texas and the Southwest U.S. — is also the type of event scientists are saying will happen more often as the world warms, said Schmidt and Meehl, who reviewed part of the climate panel report. No studies have specifically tied global warming to the drought, but it is consistent with computer models that indicate current climate trends will worsen existing droughts, Meehl said.

Studies also have predicted more intense monsoons with climate change. Warmer air can hold more water and puts more energy into weather systems, changing the dynamics of storms and where and how they hit.

Thailand is now coping with massive flooding from monsoonal rains that illustrate how climate is also interconnected with other manmade issues such as population and urban development, river management and sinking lands, Schmidt said. In fact, the report says that "for some climate extremes in many regions, the main driver for future increases in losses will be socioeconomic in nature" rather than greenhouse gases.

There's an 80 percent chance that the killer Russian heat wave of 2010 wouldn't have happened without the added push of global warming, according to a study published last week in the Proceedings of the National Academy of Sciences.

So while in the past the climate change panel, formed by the United Nations and World Meteorological Organization, has discussed extreme events in snippets in its report, this time the scientists are putting them all together. The report, which needs approval by diplomats at the mid-November meeting, tries to measure the confidence scientists have in their assessment of climate extremes both future and past.

Chris Field, one of the leaders of the climate change panel, said he and other authors won't comment because the report still is subject to change. The summary chapter of the report didn't detail which regions of the world might suffer extremes so severe as to leave them marginally habitable.

The report does say scientists are "virtually certain" — 99 percent — that the world will have more extreme spells of heat and fewer of cold. Heat waves could peak as much as 5 degrees hotter by mid-century and even nine degrees hotter by the end of the century.

And global warming isn't the sole villain in future climate disasters, the climate report says. An even bigger problem will be the number of people — especially the poor — who live in harm's way.

University of Victoria climate scientist Andrew Weaver, who wasn't among the authors, said the report was written to be "so bland" that it may not matter to world leaders.

But Masters said the basics of the report seem to be proven true by what's happening every day. "In the U.S., this has been the weirdest weather year we've had for my 30 years, hands down. Certainly this October snowstorm fits in with it."