Obama: Republicans Have 'Gone Off the Deep End' 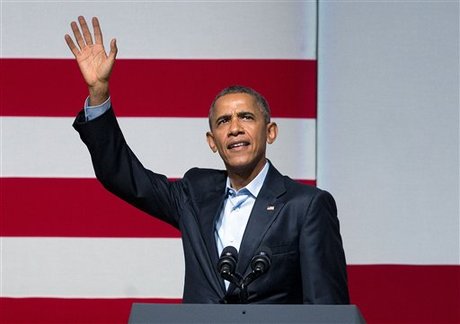 President Barack Obama said Saturday that the Republican Party has "gone off the deep end" with its messy failure to elect a new speaker of the House of Representatives.

The Republican-controlled House was left in shock and disarray this week when Kevin McCarthy, the frontrunner to replace John Boehner, who has announced his resignation, suddenly withdrew from the race because of a revolt by conservatives.

The challenge now is to find a consensus candidate who can soothe wounds and unite a fractious caucus.

Obama addressed the drama at an expensive fundraiser at a private home in Los Angeles. He was there after visiting Oregon Friday to try to console relatives of the nine people killed by a shooter at community college. The shooter killed himself.

Obama described himself as not intrinsically partisan and said some members of his party have faulted him for not being partisan enough.

"But I will tell you at this moment in history, the choices are stark. And facts, evidence and values are on our side. And the other side has gone off the deep end," Obama said.

Obama added: "And what you're witnessing in the House fight right now is that even deeply conservative folks are not considered ideologically pure enough and we would rather burn the House down than admit the possibility of democratic process that requires compromise."