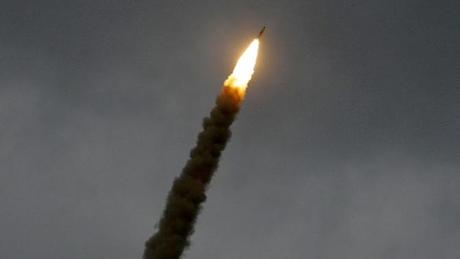 Iran announced Sunday it had successfully tested a new domestically produced long-range missile, which it said was the first that could be guided all the way to targets.

The defense ministry posted pictures of the launch of the missile, named Imad, on its website but no details were given about its maximum range or other capabilities.

"This is Iran's first long-range missile that can be guided and controlled until hitting the target," Defense Minister Hossein Dehghan was quoted as saying.

The launch comes months after some Iranian officials voiced concern that the Islamic republic's recent nuclear deal with world powers could place limits on its missile program.

"We don't seek permission from anyone to strengthen our defense and missile capabilities," Dehghan said.

Iran has said its missiles would never carry a nuclear warhead as it has no plans to develop atomic weapons, but military officials have insisted on expanding the country's missile program.

I hope those are not the same type that the Russians launched from the ships half of which landed in Iran rather that in Syria. Come to think of it the Russians could have ment it this way, Putin had been talking up his fight against loony hard line ISlamic states and what's loonier than the iSlamic republic of Iran.