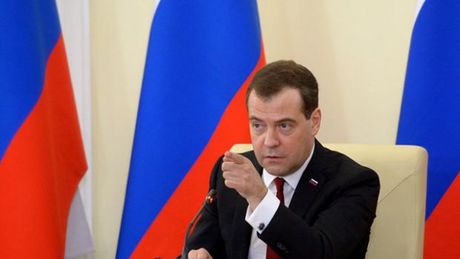 Russian Prime Minister Dmitry Medvedev said Saturday that Russia is fighting for its national interests in Syria, not for President Bashar Assad.

"Of course we are not fighting for specific leaders, we are defending our national interests, on the one hand," Medvedev said in an interview to air on state television.

"And secondly, we have a request from the lawful authorities (of Syria). That is the basis we are working on," he said, quoted on the government website.

Medvedev said Russia in Syria is defending itself against the threat of Islamist extremists coming to its own country.

"The president said this: it's obvious that if we don't destroy these terrorists there, they will come to Russia."

Medvedev said that it did not matter to Russia who heads Syria in the future, as long as it is not the Islamic State jihadist group.

"We don't want IS to head Syria... It should be civilized, legitimate authorities," he said.

"Who will lead Syria should be decided by the Syrian people," Medvedev said.

Nevertheless he added that currently Russia is "working on the basis that Assad is the legitimate president."

Moscow this week expressed outrage that the United States declined to host a Russian delegation on Syria led by Medvedev.

"I think this is stupid behavior," Medvedev said. "As a result of such decisions or a refusal to hold talks, the Americans just demonstrate their weakness."

Medvedev said that the U.S. operation in Syria had "practically zero" impact on IS and "only Russia's intervention changed the situation."

Everyone knows that Russia came to Syria to elect General Michel Aoun president and that's the only reason for real. I know all about geopolitics.

No you fool, you are inviting them into Russia. Just like Hezb of iran did in Lebanon.

lol you guys are like open books, hating the fact that your head-chopping idols are getting a beating.

it is clear russia is afraid for its naval bases in syria, that is the only reason they are there...

but when he says the syrian gvt should be "It should be civilized, legitimate authorities,", i doubt assad regime is civilized when evryone knows how he tortures, kidnaps,kills any of his opponents: yes civilized indeed by M8 standards...

spoken like a true armchair geopolitical strategist. wonder why the pentagon hasn't recruited you yet lol

sure we know for you idiot M8ers there is just one choice: bashar... no other alternative.. no wonder, you have limited brains...

what other option do you preconise? abu bakr? or would you pick another puppet from the collection they keep in that hotel in Istanbul?