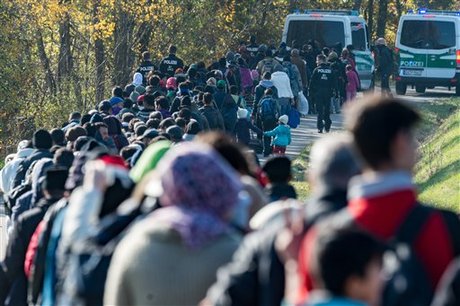 Tensions mounted at the key southern gateway for thousands of migrants into Germany, with overstretched German and Austrian officials trading barbs as asylum seekers queued for hours in the cold at border posts.

"Yesterday, I was here from five o'clock in the morning to two o'clock the next night. But the police didn't open the border," said Murtaza, 18, an Afghan at one of the crossings, Simbach am Inn.

Wrapped up in several layers of blankets and huddled close to each other for warmth, about 100 refugees were waiting at the crack of dawn to cross into Germany from Austria.

"It's very cold here, the old people is sick, and some children is very badly sick and I don't know... no one will care about the refugees," Murtaza added in halting English.

After a slight drop in early October, the number of asylum seekers arriving in Germany has risen again in recent days, putting authorities under intense pressure.

As German officials scramble to find shelter and ready infrastructure to welcome the newcomers, tempers frayed with regional authorities hitting out at the Austrians, accusing the neighbors of waving refugees on without informing them of their numbers.

"Austria's behavior is hurting our neighborly relations. We cannot and should not deal with each other this way," Bavarian state premier Horst Seehofer told the Passauer Neue Presse in an interview on Tuesday.

German federal police spokesman Heinrich Onstein said: "We are doing everything to prevent the migrants from having to sleep outdoors."

"The problem is that we do not know how many people will arrive, and at which border post," he added.

Austrian police however hit back, rejecting the claims as "a joke".

"If Austria receives 11,000 people in Spielfeld on a daily basis, Bavaria cannot say that it will just process up to 50 people an hour at its border. That's a joke," said police spokesman David Furtner.

Meanwhile at the Simbach border crossing, migrants had other things on their minds than the tensions between the two EU neighbors.

To shield themselves from the bitter wind, the asylum seekers had draped cloths over the sides of the bridge leading into Germany.

"In Syria, I left because of the bombs and now, here, it's like a prison. They tell us nothing, we know nothing," said an elderly man called Walid.

"Yesterday, some people of my family could go but not me, and my two daughters. The German police didn't explain why, and now, my family is cut in two," he said.

A dozen migrants who were tired of waiting, including several with children in tow, decided to take the risk of crossing a railway bridge to get into Germany.

"I know it's dangerous, but I didn't want to wait more," said a young Afghan, who declined to give his name.

As it turned out, just barely minutes after they headed down into the bridge, they were greeted by a German police officer who led them away saying, "Hello! You're in Germany now. Follow me, this way."