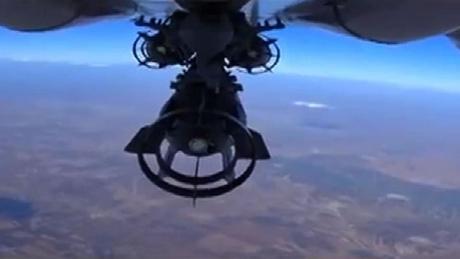 Russia appears to have carried out strikes in southern Syria's Daraa province for the first time in an apparent expansion of its aerial campaign, a monitor said on Thursday.

"Warplanes that are believed to be Russian carried out strikes on the Hara, Tal Antar, Kafr Nasaj and Aqraba areas of northern Daraa" last night, said the Syrian Observatory for Human Rights monitor.

"This would be the first time that Russian planes have carried out strikes in Daraa," Observatory head Rami Abdel Rahman told Agence France Presse.

The Britain-based monitor had no immediate details on casualties or damage in the strikes.

The area targeted is controlled by an array of opposition groups including moderate and Islamist rebels and the Al-Qaeda affiliate Al-Nusra Front.

There have been clashes there between opposition and regime forces, but the province has not seen the kind of large-scale ground operation launched by government forces in coordination with Russian strikes elsewhere in the country since Moscow's air campaign began on September 30.

The southern province, which borders Jordan, is largely under opposition control, with the provincial capital divided between regime and rebel forces.

On Thursday morning, the Observatory said, Russian warplanes renewed strikes elsewhere in Syria, including in the central province of Homs and the northwestern province of Idlib.

Russia says its air campaign targets the Islamic State group and other "terrorists" but the opposition accuses Moscow of focusing on moderate and Islamist rebels rather than jihadists.

Two weeks ago the drunken Russians said they broke the backbone of the rebels and destroyed their combat capabilities. I wonder why they are still bombing and who?

And they will be saying the same thing 3 years from now.

A "significant increase" of air strikes on Syrian hospitals recently has killed at least 35 patients and medical staff and wounded 72, Doctors Without Borders (MSF) said Thursday.

"Warplanes carried out a series of strikes on areas in the city of Douma in Eastern Ghouta, killing at least eight civilians, including a child," said Observatory chief Rami Abdel Rahman.

And when your fellow Shias are bombed by Israel you cry. Are you not ashamed with such double standards?

What are you going to do about it? They will continue until there are no more takfiris to bomb, just like they did in Chechnya.

and no more innocent civilians, don't forget that in your list...

Hey shab, the more Syria burns, the more it will effect Lebanon negatively. Is that what you want?