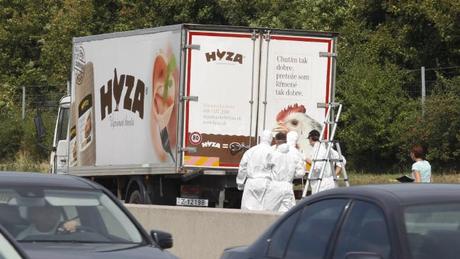 Hungarian authorities on Wednesday said they had accepted an Austrian request to take over a probe into the deaths of 71 migrants found in a truck on an Austrian motorway in August.

Vienna asked Budapest last month to handle the case, because the 59 men, eight women and four children were thought to have suffocated while the lorry was still in Hungary.

"The Hungarian authorities are taking over the investigation into the tragedy involving the death of 71 migrants on the A4 motorway," Hungary's chief prosecutor Peter Polt told the state news agency MTI.

The badly decomposing bodies of the 71 people were discovered on August 27 inside an abandoned refrigerator truck in Burgenland state, close to the Hungarian border.

Investigations revealed that the migrants -- mostly from Syria, Iraq and Afghanistan -- had been picked up at Hungary's border with Serbia and transported to Austria via Budapest.

An autopsy showed they had most likely died from lack of oxygen shortly after leaving the Hungarian capital.

The case sparked international revulsion and highlighted the plight of migrants and refugees putting their lives in the hands of human smugglers to reach northern Europe.

Five men, four Bulgarians and an Afghan, are under arrest in Hungary over the tragedy.

A sixth person had also been detained in Bulgaria but was released on October 8.

EU member Hungary has taken a controversially hardline stance against migration, as the bloc struggles to cope with its worst refugee crisis since World War II.

In a bid to stem the record influx, Budapest brought in tough anti-migrant law in September and sealed its southern borders with a razor-wire fence.