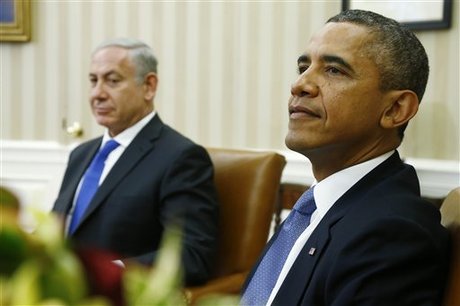 Barack Obama and Benjamin Netanyahu will hold a post-row summit Monday, hoping a massive 10 year defense deal will help them move beyond a bitter public fight that shook a decades-old alliance.

After acerbic clashes over the U.S.-backed nuclear deal with Iran, the two leaders will discuss a deal expected to be worth more than $30 billion which will include a string of advanced weaponry systems, officials said.

The deal will not be finalized during the summit and would only come into effect after a current accord expires in 2017.

But Obama and Netanyahu are expected to discuss commitments that could see Israel get more than the 33 hi-tech F-35 jets already ordered, precision munitions and a chance to buy V-22 Ospreys and other weapons systems designed to ensure Israel's military edge over its neighbors.

The weapons said to be under discussion reflect the prominence of Iran in U.S. and Israeli military thinking.

The F-35 is the only aircraft able to counter the S-300 surface-to-air missile system that Russia has suggested it may sell to Tehran.

Officials said Israel may also seek to ensure that other U.S. allies in the region do not get the F-35.

The White House has so far rebuffed Arab Gulf states' requests to buy the planes.

But while Israel has been offered some bunker-busting bombs, divisions over how to handle Tehran may put the sale of 30,000 pound "Massive Ordnance Penetrators" that could be used to target Iranian nuclear sites off the table.

"This is not something that has been raised in the context of the MoU discussions," said senior Obama national security aide Ben Rhodes referring to the deal, known formally as a memorandum of understanding.

The visit, Rhodes said, "would be an opportunity to discuss and hear from Israel its assessment of its security challenges and the related security needs it has... whether it is something like the F-35 or a variety of others."

During his last trip to Washington in March, the Israeli prime minister found the door of the White House slammed firmly shut, with Obama refusing to meet him.

The White House had been infuriated by Netanyahu's decision to appear in Congress at Republicans' invitation and urge US lawmakers to vote against a deal to curb Iran's nuclear program.

Obama views the deal as a signature achievement that will close down Tehran's pathway to getting a bomb.

The Israeli leader publicly and stridently opposed a deal, describing it as a "stunning, historic mistake."

He will try to make amends in part by addressing the Center for American Progress, a Washington think-tank with close ties to the White House and the Democratic Party.

Israel could still be a help or hindrance to Obama in keeping the deal on track, ratcheting up domestic pressure on the White House should Iran stall or falter on implementation.

Some commentators have called for Israel and the United States to set up a formal joint implementation mechanism, a move that would infuriate Tehran.

Amid an uptick in violence between Israelis and Palestinians, Obama will also be looking for Netanyahu to recommit to a peace process centered around a two-state solution, which he seemed to shy from during a recent election campaign, much to Obama's chagrin.

Rob Malley, the National Security Council coordinator for the Middle East, said Obama would look to hear ideas from Netanyahu about how to move the process forward.

"The President has said we have to reach a realistic assessment that there will not be a comprehensive final status agreement in the remainder of his term, and there likely may not be meaningful negotiations between the two sides," said Malley.

"Given that reality, which is a new one, how does the prime minister himself see Israel going forward?"

Obama is only focused on domestic issues. He wants to retreat to the isolationist policy of pre WW2 which is all together not a bad thing. Problem is, his half arsed mideast policy. Pandering to neo cons in both sides of US politics. His Syrian policy will one day be exposed just like the Nicaraguan policy in the 80s. Bibi mocks the US and the western world with his outright racist, extremist position on Palestine, Turkey is openly siding against western kurdish allies fighting ISIS and he is too weak to make an historic alliance with Russia, not seen since WW2.