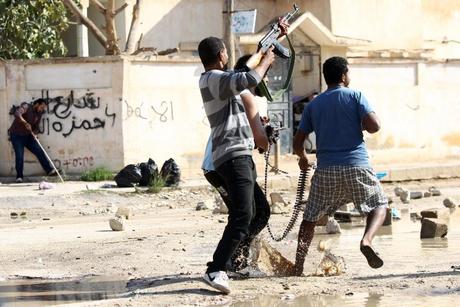 The United Arab Emirates shipped weapons to Libyan factions fighting Islamists while offering a $50,000-month job to the U.N. envoy negotiating a peace deal for Libya, according to leaked emails reported by the New York Times on Thursday.

The latest revelations again raised questions about allegations of conflict of interest targeting the envoy, Bernardino Leon, that may compromise the preliminary deal for Libya that he has negotiated.

In a statement, Leon said that the UAE, Qatar, Turkey and Egypt "have consistently supported U.N. peace efforts" in Libya and stressed the need to be "extremely cautious" about the reports.

"I have decided to request a full clarification of the issue, including from the United Arab Emirates authorities as I take time to reflect on the next steps in my professional career," said the Spanish diplomat.

Leon was appointed in 2014 to lead U.N. efforts to form a unity government between Libya's rival factions.

The envoy in July accepted a high-paying position as the first director of the government-funded Emirates Diplomatic Academy in Abu Dhabi just as he was negotiating the final draft of the power-sharing deal.

Leon's controversial appointment was announced last week, but the UAE's alleged role in supplying weapons came to light on Thursday.

The New York Times reported that the UAE sent weapons to Libya in violation of a U.N. arms embargo to counter regional rival Qatar, which was arming Islamist militias.

The emails referred to an Emirates-based company, Morrison Commodities, that violated the arms embargo in Libya, possibly in cooperation with a Saudi firm called Saudi International Military Services.

Other emails cited U.S. complaints that the UAE company Al Mutlaq Technology had bought $100 million in weapons from North Korea including machine guns, rifles and rockets.

"Given the inaccurate or false information we have seen in previous months regarding the process in Libya and the U.N. and my role, I believe it is imperative to be extremely cautious about the most recent reports," Leon said.

"This is the most critical moment for peace in Libya," he added.

Libya has had two administrations since August 2014, when an Islamist-backed militia alliance overran Tripoli, forcing the internationally recognized government to take refuge in Tobruk, in the far east of the country.

The oil-rich north African country descended into chaos after the fall of Moammar Gadhafi in its 2011 revolution.

Under the power-sharing deal negotiated by Leon, Libya will be governed by a nine-member presidential council made up of a prime minister, five deputy prime ministers and three senior ministers.

But the agreement has yet to win the full endorsement of all sides.

The president of the Tripoli-based administration, Nouri Abusahmain, last week accused Leon of bias in his mediation and called into question the peace deal.

A new envoy, Martin Kobler of Germany, is due to replace Leon in the coming days.