Obama Says U.S. Had No 'Specific' Intelligence on Paris Attacks 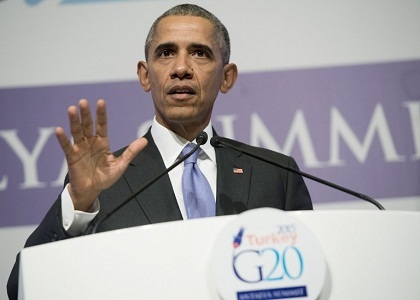 U.S. President Barack Obama said Monday the United States had no precise intelligence warning of the Paris bombing and shooting attacks that have been claimed by Islamic State jihadists.

The United States has agreed to speed up its sharing of military intelligence with France to try to avert such assaults, the U.S. leader added in a news conference after a summit in Turkey.

"There were no specific mentions of this particular attack," Obama said following a gathering of leaders of the Group of 20 top world economies in the Mediterranean resort of Antalya.

The United States is working closely with France in its investigation of the attack and its hunt for suspects in the "heinous" attacks, he said.

"France is already a strong anti-terrorism partner and today we are announcing a new agreement: We are streamlining the process by which we share intelligence and operational military information with France."

The agreement would allow U.S. personnel to pass threat information including on Islamic State jihadists to France "even more quickly and more often" Obama added.

"We need to be doing everything we can to protect against more attacks and protect our citizens."

Obama also hailed "modest progress" in diplomatic efforts to find a solution to the Syria conflict, after high-level talks between world powers including Russia in Vienna.

"We have begun to see some modest progress on the diplomatic front, which is critical," Obama told reporters.

"The Vienna talks mark the first time that all the key countries have come together... and reached a common understanding."

The Vienna talks have seen the world powers find common ground on the need for a ceasefire in Syria, U.N.-brokered peace talks and a political transition.

"These are obviously ambitious goals. Hopes for diplomacy in Syria have been dashed before," cautioned Obama.

"There are any number of ways in which this latest diplomatic push could falter," he added.

Obama, who held an informal coffee-table summit with Russian President Vladimir Putin on Sunday, said there were still differences between the two leaders over the future of President Bashar Assad "who we do not believe has a role in Syria's future because of his brutal rule."

"What is different this time, and gives us some degree of hope, is that for the first time all major countries on all sides of the Syrian conflict agree on a process to end this war," he said.

As world leaders grapple with a migrant crisis in Europe and elsewhere, Obama also warned against "equating the issue of refugees with the issue of terrorism."

"Many of the refugees are the victims of terrorism themselves, that is what they are fleeing. Slamming the door in their faces would be a betrayal of our values," the U.S. leader said.