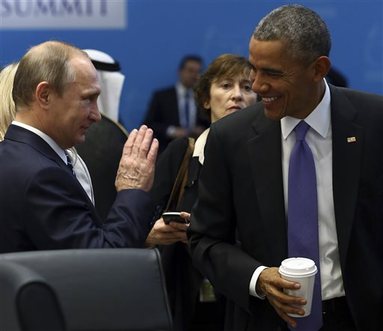 U.S. President Barack Obama on Wednesday praised Russia's role in talks to end the Syria crisis and offered the prospect of better ties if Moscow focused military strikes on the Islamic State group.

Obama said Russia had been a "constructive partner in Vienna in trying to create a political transition," referring to international talks in Austria.

But, he said, there were still differences over the fate of Syrian ruler Bashar Assad, and Moscow's current military focus on defending him.

"There is obviously a catch, which is Moscow is still interested in keeping Assad in power," Obama said.

But he added: "Those differences have not prevented us at looking at how could we set up a cease fire."

Obama also expressed hope that Russia may shift the military focus from defending Assad to attacking the Islamic State group.

Putin's government recently blamed the jihadists for downing a Russian aircraft over Egypt in October, killing 224 people on board.

"In their initial military incursion into Syria, they have been more focused on propping up President Assad," Obama said.

"If, in fact, he shifts his focus and the focus of his military, to what is the principle threat, which is ISIL, then that is what we want to see," Obama said using another acronym for the group.

"We are going to wait and see whether Russia does end up paying more attention to ISIL targets. If it does so, that's something we welcome."

Obama was speaking after a meeting with Philippine President Benigno Aquino in Manila.