Report: IS Resorting to Brainwashing Youth to Make New Recruits 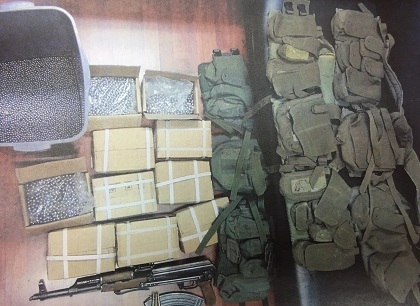 The Islamic State has resorted to forming “cluster cells” of members in order to expand its ranks and adopting religious “brainwashing” to recruit new members, reported As Safir newspaper on Thursday.

Widely informed sources told the daily: “Confessions of some detainees have revealed that the IS has effective religious and security bodies that brainwash youths, who are mainly teenagers, in order to turn them into terrorist extremists within two months.”

“Such practices have created surprise among the family members of these youths who are shocked by the change in their relatives from regular people carrying on with their normal lives to extremists,” they added.

They gave the example of detainee Ibrahim al-Jamal, who “disappeared” from his family at around Eid al-Fitr in August before “reappearing” around Eid al-Adha in September, justifying his absence to having work in Beirut.

He returned to his family a changed man, demanding that his sister wear the hijab and objecting to several of his father and his brothers' actions, continued the sources.

His relatives said that he returned to them as a different person.

He then disappeared again before being arrested with an explosive vest in his possession, said the sources.

Al-Jamal was arrested about a week ago in al-Qobbeh neighborhood in the northern city of Tripoli.

The same scenario was repeated with detainee Ahmed M., known as “Abou Othman,” who used to work as a valet at an up-scale restaurant in the Dam wal Farz area in Tripoli, reported As Safir.

His job allowed him to form ties with several clients, security, political, and social figures who frequented the restaurant on an almost daily basis.

His coworkers did not sense any change in his manner, except that he had become more conservative religiously in recent weeks, continued the daily.

Al-Jamal had at one point handed “Abou Othman” an explosive vest, but the latter did not recognize him because he was masked, said As Safir.

“Abou Othman” was consequently indifferent to al-Jamal's arrest because he had not really known or recognized him, leading security forces in the case to conclude that the IS was establishing “cluster cells,” whose members do not know each other except through a certain code, explained the sources.

Information obtained by As Safir said that “Abou Othman” was likely connected to the IS leadership in Syria's al-Raqa.

He became affiliated with it through “Abou Baraa al-Lubnani,” a Lebanese IS member in the outskirts of the northeastern border region of Arsal who originally hails from Tripoli and is directly overseeing the actions of the IS in the North.

Meanwhile, As Safir said that a security forces member has been found to be linked to the IS.

Shawqi S. was tasked with receiving explosives and detonators from the outskirts of Arsal and delivering them to Tripoli.

He made the deliveries while dressed in his military uniform in order to avoid raising suspicious.

A quantity of bomb-making material and arms was seized Wednesday and a Lebanese suspect was captured as several Syrians were arrested in raids across the country, as part of a massive crackdown launched in the wake of the Dahieh blasts.

The Internal Security Forces said four Lebanese were arrested and around 180 kilos of explosives and three suicide vests were seized during the raids that were staged Tuesday in the Tripoli districts of al-Dam wal Farz and al-Qobbeh.

Weapons, steel balls, detonators, and fuses used in the making of suicide belts were also confiscated in the raids.

The ISF noted that “more than 50 suicide vests” could have been produced from the seized bomb-making material.

The four arrested on Tuesday are accused of having communicated with the al-Jamal.

The five men are members of the IS network that carried out a twin suicide bombing last week in the Beirut southern suburb of Bourj al-Barajneh. The blasts killed 44 people and wounded 239 others, in the worst such attack in years.

"reported As Safir newspaper on Thursday."

As Safil is as credible as when mowaten says he is Lebanese and Secular or when Nassrallah says Palestine remains his number one priority and that he is fighting terrorism.

LOL eagleyawn you're SOOOOOO funny! can I hire you as a clown?

iranian troll ; why are you trying to divert the topic with your idiocies? are you that uncomfortable with the facts here?

what topic eagleyawn, you cracked the case already! the whole myth of isis extremist and hateful ideologies was all invented by as safir, in reality they dont exist and they dont brainwash or beahead or blow up people. what else is there to discuss? case closed, congrats.

I respect Mr. mowaten, Mr. flamethrower, and Mr. Mystic for their objectivity and love for Iran.

Israel, Iran, Hezbollah and Putin are the only 4 countries fighting terrorism at the moment.... the rest pfffft.

Hezballlah has been doing this for decades, very effective as illustrated by mowaten, southern, mystic etc

Isn't that what Hizballah does too? Food for thought. And please stop screwing the Christians over in your perverted plots to take over, it's disgusting.

As Safir forgot to mention the "tea ceremony": Recruits are asked to sit down for a glass of tea with their recruiters. What the recruits don't know is that their glass had been laced with Captagon. As the Cap takes effect (easily detectable by the dilated pupils), the recruiter passes from "moderate" subjects to extreme subjects - and you would be surprised what you would believe while you are on Captagon. And as with other methamphetamines or psilocybin or LSD, what beliefs you develop while you're high remain with you even after you "land". It's the fastest way to rewire a brain. Originally used to treat depression and low self-esteem, but since then it has been weaponized.

Brain washing kids you say? thats a new one lol. Kizb and Isis use the same strategies to gain their street supporters. At any rate they both keep Israel safe so to that end they serve a great purpose.