Obama Calls on Russia to Focus on Islamic State Group 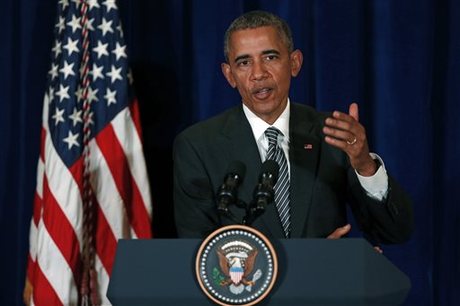 He says initial military operations by Russia did not add to efforts to deter IS, and in some ways, strengthened it.

Obama says he told Russian President Vladimir Putin during a recent conversation that he needs to target those who killed Russian citizens. He says Russia has not officially committed to a transition that would move Assad out of power, but has agreed to a political transition process.

Obama commented Sunday at the close of a summit in Malaysia.

In the wake of the Paris terror attacks, Obama will host French President Francois Hollande at the White House on Tuesday.

America is not weak, Obaba is.

Obama have to shut his mouth once and for all. ISIS, Nusra, Ahrar Al Sham, Free Salafi Army.

They are all the same and must all be destroyred, Russia knows this too.

"He says initial military operations by Russia did not add to efforts to deter IS, and in some ways, strengthened it."

sure russia will be careful not to eradicate IS, they serve bashar's purposes and interests...

The sentence should be corrected:

....M.E countries AND IRAN are sectarian countries where each sect sees the other as its enemy...