Mali and Neighbors in Mourning as Siege Hotel Yields Clues 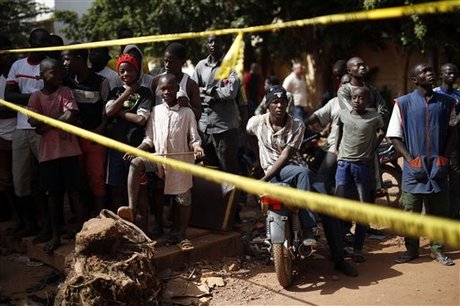 Mali began three days of national mourning Monday for the victims of a jihadist siege at a luxury hotel that left at least 19 dead, with neighboring Senegal, Mauritania and Guinea joining in solidarity.

"The investigation is advancing," said prosecutor Boubacar Sidiki Samake, who is in charge of the anti-terrorist probe.

Samake said police hoped to soon "flush out the attackers and bring them to justice," adding that "it is clear that they had accomplices who helped them come to the hotel."

"You will see developments in the coming days," he said, adding that police had staged several raids on homes.

The police found a suitcase with grenades in the hotel lobby and were following up "several leads" linked to "objects" left by the gunmen, a Malian police source told AFP.

The attack has been claimed by two separate jihadist groups and a manhunt launched for three suspects.

Gunmen went on the rampage at the Radisson Blu hotel from early morning on Friday, shooting in the corridors and taking 170 guests and staff hostage.

The assault, which ended when Malian and international troops stormed the building, left 19 people dead, including 14 foreigners, as well as two attackers, according to a "definitive" report by the government.

The victims included six Russians, three Chinese, two Belgians, an American, an Israeli, a Senegalese and a member of the Malian special forces.

The U.N. peacekeeping force in Mali, MINUSMA, however spoke of 22 fatalities, including two attackers.

Senegal's President Macky Sall visited Bamako on Sunday to show national solidarity and the support of the West African regional bloc ECOWAS which he chairs.

"Mali will never be alone in this fight, we are all committed because we are all involved," he said, announcing that Mali's neighbors Senegal, Mauritania and Guinea would also observe three days of mourning.

The Al-Murabitoun group, an Al-Qaida affiliate led by notorious one-eyed Algerian militant Mokhtar Belmokhtar, has claimed responsibility for the attack.

The group said Sunday there were only two attackers and suggested they were Malian.

In a recording broadcast by Al-Jazeera, a spokesman identified them as Abdelhakim al-Ansari and Moez al-Ansari, the term "al-Ansari" indicating they were indigenous jihadists.

But a jihadist group from central Mali, the Macina Liberation Front (LWF), also claimed the attack in a statement sent to AFP Sunday, saying it was carried out by a squad of five, including "three who came out safe and sound".

An informed source spoke of "three or four accomplices" believed to have aided the "foreign" gunmen who attacked the hotel frequented by businessmen, diplomats and other expatriates.

"Everything points to two foreigners," the source said.

The same source said "it appears that the two foreigners went from bar to bar to avoid attracting attention, and at dawn (Friday), Malians may have guided them in the attack on the Radisson".

Guinean singer Sekouba Bambino Diabate, who was among the survivors, told AFP the gunmen spoke English among themselves.

French Defence Minister Jean-Yves Le Drian has said Belmokhtar, one of the world's most wanted men, was "likely" the brains behind the assault.

"He is circulating," he said of the Algerian jihadist believed to be in Libya.

Despite a state of emergency imposed late Friday, residents of Bamako were trying to return to normal life.

Security remained high at the major hotels and was tighter than usual, though more discreet, at public buildings and banks.

"People are not being vigilant. We forget. I don't know whether it's because of the problems of daily life, but people just aren't being careful here," said hotel worker Daouda Sissoko.

Others are concerned that Friday's attack will have more economic repercussions for a country still recovering from a 2012-13 civil war.

Mali has been torn apart by unrest since the north fell under the control of jihadist groups linked to Al-Qaida in 2012.

The Islamists were largely ousted by a French-led military operation launched the following year, but large swathes of Mali remain lawless.

France has more than 1,000 troops in its former colony, a key battleground of the Barkhane counter-terror mission spanning five countries in Africa's restive Sahel region.