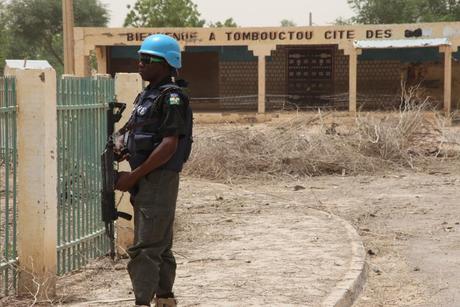 A U.N. employee was killed Tuesday in an attack on a peacekeeping convoy in northern Mali, Secretary General Ban Ki-moon said.

The attackers used explosives on the road from Goundam to Timbuktu where the vehicles from the U.N. MINUSMA force were traveling, he said.

Ban condemned the attack in which a civilian staff member was killed and said such actions "will not alter the determination of the United Nations to support the Malian people and the peace process."

The attack came just days after Islamist gunmen stormed a luxury hotel in Bamako, killing at least 20 people and taking hostages before Malian, French and U.S. troops moved in to end the siege.

Northern Mali fell under the control of Tuareg rebels and jihadist groups linked to Al-Qaida in mid-2012 before they were beaten back by a French-led operation in early 2013.

In June, the two main armed factions signed a peace deal to end the conflict in the north, but some splinter groups are opposing the agreement.

Two separate jihadist groups have claimed responsibility for the assault on the Radisson Blu hotel in Bamako on Friday: the Al-Murabitoun group, an Al-Qaida affiliate led by notorious one-eyed Algerian militant Mokhtar Belmokhtar, and the Macina Liberation Front (LWF) from central Mali.

The United Nations has deployed some 10,200 peacekeepers in Mali to help restore order after the Islamist takeover in the north but the mission has come under repeated attacks.