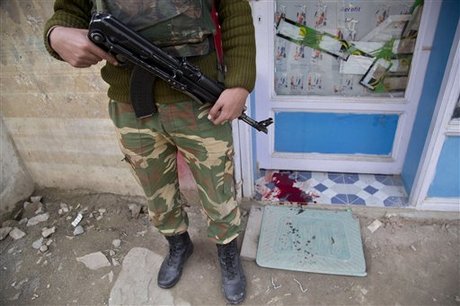 The Indian army killed three suspected rebels and another person was shot dead during a six-hour gun battle Wednesday on a military camp in Indian Kashmir near the border with Pakistan, a military spokesman said.

Heavily-armed fighters stormed the army base in Tangdhar, 140 kilometers (87 miles) northwest of the main city of Srinagar, setting off grenades and firing automatic weapons.

"Three terrorists were killed in the exchange of stand-off fire that began in the morning hours. One soldier was wounded in the firefight," defense spokesman in Srinagar N.N. Joshi told AFP.

A civilian who worked on the base was also killed in the firing, Joshi said, adding that the attack finished some six hours after the militants infiltrated the base.

Kashmir has been divided between India and Pakistan since the end of British colonial rule in 1947.

Both claim the Himalayan territory in its entirety and have fought three wars over its control.

Several rebel groups have for decades been fighting Indian forces deployed in the region, seeking independence or a merger of the territory with Pakistan.

The fighting has left tens of thousands dead, mostly civilians.

Islamabad denies the charge, saying it provides only political support for their struggle for self-determination.

In July, three gunmen stormed a police station in neighboring Punjab state, close to the border with Pakistan, and killed seven people.

The Indian government said the attackers crossed the border from Pakistan before launching their assault that led to a gun battle that lasted nearly 11 hours.

The attack in Kashmir comes on the eve of Thursday's anniversary of the 2008 attacks in Mumbai which claimed 166 lives, and was blamed by India on Pakistan militants.