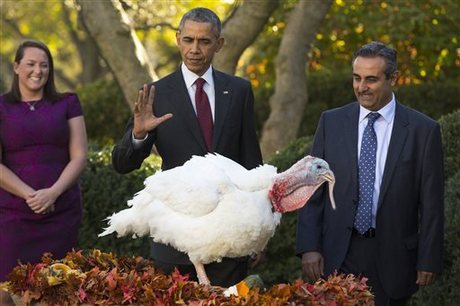 U.S. President Barack Obama Thursday delivered a Thanksgiving message in which he compared modern refugees to the pilgrims whom the holiday celebrates, urging Americans to open their arms to the potential immigrants.

"Nearly four centuries after the Mayflower set sail, the world is still full of pilgrims -- men and women who want nothing more than the chance for a safer, better future for themselves and their families," Obama said in his weekly address, referring to the boat on which the pilgrims arrived in the New World.

Thanksgiving was first celebrated by the group after fleeing religious persecution in England. For many Americans, it has become a family-oriented day marked with an enormous meal of roast turkey, an assortment of side dishes and a slice or two of pie.

"I've been touched by the generosity of the Americans who've written me letters and emails in recent weeks, offering to open their homes to refugees fleeing the brutality of ISIL," Obama said, referring to the Islamic State group.

Immigration has taken center stage as an important issue ahead of the 2016 presidential race but reached fever pitch following the deadly Paris attacks earlier this month.

The shootings and suicide bombings have stirred fears in North America and Europe that jihadists could seek to blend in with refugees in order to strike later.

Obama himself faces a barrage of opposition to his own plan to resettle 10,000 refugees in the coming year.

"People should remember that no refugee can enter our borders until they undergo the highest security checks of anyone traveling to the United States," Obama said.

"That was the case before Paris, and it's the case now."

Obama also reminded listeners that Thanksgiving was not just an opportunity for people to give thanks for their personal blessings.

"On this uniquely American holiday, we also remember that so much of our greatness comes from our generosity," he said.