Three Dead in Rocket Attack on U.N. Base in North Mali 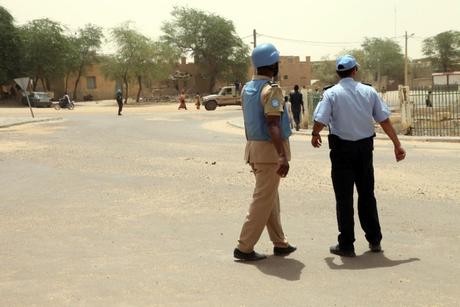 Two U.N. peacekeepers and a civilian were killed and 14 others were injured in a rocket attack Saturday on a U.N. base in the northeastern Malian town of Kidal, U.N. and local sources said.

"Our camp in Kidal was attacked early this morning by terrorists using rockets," said an official from the U.N. peacekeeping mission in Mali (MINUSMA), adding that two Guinean U.N. peacekeepers and a civilian contractor were killed. A local official confirmed the report.

Another U.N. source said 14 others were injured in the attack, including three seriously.

The attack came eight days after a siege at a luxury hotel in Mali's capital Bamako, in which 20 people died including 14 foreigners.

Armed men held around 170 guests and staff hostage in the November 20 siege that lasted about nine hours before Malian and international forces stormed the hotel to free the captives.

Mali has been torn apart by unrest since the north fell under the control of jihadist groups linked to Al-Qaida in 2012.

The Islamists were largely ousted by a French-led military intervention early the following year, but large swathes of Mali remain lawless and prone to extremist attacks.

MINUSMA's mission has been the costliest for U.N. peacekeepers in terms of human lives since the 1993-95 UNOSOM II mission in Somalia.

France has more than 1,000 troops in Mali, a former colony and a key battleground of its Barkhane counter-terror mission spanning five countries in Africa's restive Sahel region.