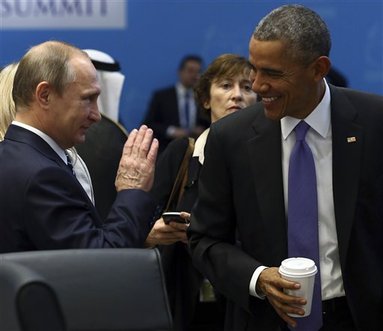 U.S. President Barack Obama pushed Monday for a "de-escalation" of a furious war of words over Turkey's downing of a Russian warplane, a White House official said.

Obama called for an easing of inflamed Russia-Turkey tensions in a closed-door meeting with Russia's Vladimir Putin on the sidelines of a climate summit in Paris, the official said.

Hours earlier, Turkey sent back to Russia the body of a pilot killed when his plane was shot down by the Turkish air force on November 24 for allegedly violating its air space on the Syrian border, reports said.

One of the Russian pilots aboard the downed plane was shot dead in Syria after parachuting from the burning aircraft, while the second was found safe and sound. One Russian soldier was killed in a rescue operation.

Putin and his Turkish counterpart Recep Tayyip Erdogan have been locked in a furious war of words since the incident and the Kremlin strongman rejected the Turkish leader's offer of face-to-face talks on the sidelines of the climate conference in the French capital.

"President Obama expressed his regret for the recent loss of a Russian pilot and crew member and reiterated the United States' support for de-escalation between Russia and Turkey," the White House official said.

The Russian and U.S. leaders discussed efforts to bring about a ceasefire and political resolution to war in Syria, he said, though there appeared to be no breakthrough over Moscow's support for Syrian President Bashar Assad

"President Obama reiterated his belief that it will be necessary for Bashar Assad to leave power as a part of the transition and stressed the imperative of focusing military efforts against ISIL, as our international coalition is doing, rather than targeting moderate opposition," the White House official said, using another acronym for IS.

Obama also offered the prospect of rolling back sanctions if Russia fully implemented peace accords signed in February over the Ukraine crisis.

The Minsk accords set out a lengthy political roadmap to resolve the conflict in the east between Kiev and pro-Russian rebels but have been delayed into next year due to wrangling between all sides.

The Kremlin confirmed in a statement that Putin and Obama had met for half an hour in Paris, without providing further details.

Moscow said it would halt fruit and vegetable imports from Turkey after Putin signed a decree over the weekend banning charter flights and the sale of package holidays, and scrapping Russia's visa-free regime with the country.