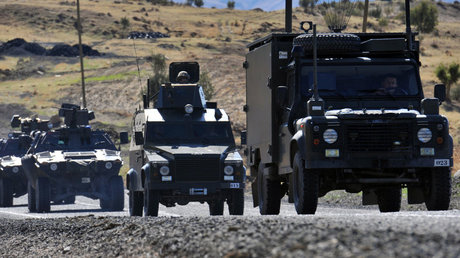 Baghdad demanded Saturday the immediate withdrawal of forces it said Turkey illegally deployed in Iraq, which is struggling to assert its sovereignty while receiving foreign assistance against the Islamic State group.

A senior officer from the Kurdish forces in the region -- which are allied to Ankara -- downplayed the deployment as a routine training rotation but a Turkish paper said it was part of deal to set up a permanent base.

The Turkish troops, tanks and artillery were sent to Nineveh, a northern province largely held by IS, in an area currently controlled by Kurdish forces but also claimed by Baghdad.

Facing major political pressure as a result of statements by American officials, Iraqi Prime Minister Haider al-Abadi has taken an increasingly hard public line on foreign forces in Iraq over the past week, terming the deployment of ground combat forces a "hostile act".

"The Iraqi authorities call on Turkey to... immediately withdraw from Iraqi territory," a statement from his office said.

"We have confirmation that Turkish forces, numbering about one armored regiment with a number of tanks and artillery, entered Iraqi territory... allegedly to train Iraqi groups, without a request or authorization from Iraqi federal authorities," it said.

The deployment "is considered a serious violation of Iraqi sovereignty," it added.

Major General Nureddin Herki, the commander of Kurdish peshmerga forces in the area, said the newly-arrived Turkish troops were part of a routine rotation in a training programme accompanied by a protection force that has since returned to Turkey.

"Before some time, a number of Turkish officers arrived to train Hashad al-Watani forces in the Zilkan base," Herki said in a statement, referring to volunteer anti-IS fighters.

"Another team arrived to the camp to replace the previous team, and the mission of the (new) force that came was only to protect the trainers and return the previous team to Turkey," he said.

Herki rejected reports that a large Turkish force had deployed to take part in an operation to recapture the nearby city of Mosul from IS.

But Turkish media reported much more major deployment than that described by Herki.

"Turkey is establishing a base in the Bashiqa region of Mosul with 600 soldiers," Turkish newspaper Hurriyet reported on its front page.

The newspaper said that an agreement to do this was concluded early last month between Iraqi Kurdish regional president Massud Barzani and then Turkish foreign minister Feridun Sinirlioglu.

The peshmerga forces deployed in the Bashiqa area are loyal to Barzani's party, which has close ties to Ankara.

Baghdad's relations with Turkey have improved recently but remained strained by Ankara's relationship with Barzani and differences over the Syrian civil war.

Abadi has repeatedly said Iraq needed all the help it could to fight IS but is also walking a fine line between receiving that support and projecting sovereignty.

The Turkish deployment is just the latest in a series of challenges he faced over the past week that have pushed him to take a hard line on foreign forces helping Iraq against IS, which overran large parts of Iraq last year.

Calls from two American senators for the number of U.S. troops in Iraq to be tripled combined with Secretary of Defence Ashton Carter's announcement that Washington would send a special forces contingent to fight IS in Iraq and Syria put Abadi under heavy pressure.

Shiite paramilitary forces dominated by Iran-backed militias came out strongly against the U.S., and Abadi issued his own series of increasingly strident statements on foreign forces.

Kanaandian and his likes see the sectarian criminal shia militias in Iraq as part of his 'civilized' world.