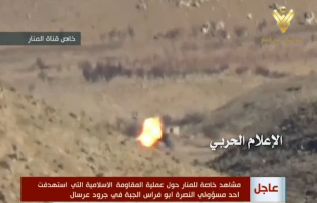 Hizbullah on Wednesday killed an al-Qaida commander and eight of his men in an attack on their convoy along the Lebanese-Syrian border, the group's media said.

Al-Manar television said the convoy of al-Qaida affiliate al-Nusra Front fighters had been traveling on the outskirts of the restive Lebanese border town of Arsal when Hizbullah struck.

Abu Firas and three Islamist fighters were killed immediately and when al-Nusra militants tried to retrieve the bodies, Hizbullah opened fire anew killing the other five.

Al-Manar broadcast footage of the arid, rocky terrain where the fighters were targeted and said clashes also erupted between the two sides during which automatic weapons and mortar rounds were used.

The station said that the Lebanese army also fired on al-Nusra positions in the area.

According to state-run National News Agency, the army fired heavy-caliber artillery at movements and gatherings of militants in Wadi Hmeid and Wadi al-Kheil in Arsal's outskirts, reportedly causing casualties.

The clashes come just eight days after al-Nusra freed 16 Lebanese soldiers and police it captured more than a year ago from Arsal.

The swap deal partially ended a long-running hostage crisis, but nine other servicemen taken prisoner at the same time are still held by the Islamic State group.

Arsal lies along Lebanon's border with Syria and it hosts many Syrian refugees as well as rebel fighters in the surrounding countryside.

loooool a civil war with the saudis or the libyans?

Wrong nusra.boy, Al Nusra people are mostly from Uzbekistan, Turkmenistan and some Syrians and other Arabs.
And the Lebanese that supports them deserve the same fate.

texas, your so called revolution city of Homs, have finally been taken back completely.
Do you really still think you can win?
Yes Turkey can continue to send in takfiris forever, but they will all jump down in Assads meat grinder.

Assad should be given the nobel peace prize,
"The man that butchered most ISIS and Al Qaeda in World History"

they should have sent you to gitmo for being a qaeda sympathiser.

Hezbollah is more Lebanese than you will ever be, ya "texasusa" enta, and as a supporter of takfiri terrorist groups you are not qualified to call anyone terrorist.

God bless the Lebanese armys efforts to fight back and avenge their fallen comrades.
Destroy those takfiris.

yet you support one and not the other. how could it be if you didnt see some difference between them?

The LAF can not defend itself without the use of guided missles. Why hasn't the LAF used the missles to defend itself? I know they were very few in number to satisfy Israel, and the LAF is not allowed to receive missles from Iran, but it is better than nothing.

Hey 1anonymetexasusa READ!!!...I have not read that the LAF have used the guided missles...ONLY shelling, which is inaccurate. Why hasn't the LAF used them??? Are they saving them when they are about to be overrun and massecred??? I am NOT belittling the LAF? I would like to see the LAF have thousands of guided missles!!! You are the one who wants the LAF be slaves to the pro-Israeli states so they will be weak!!!

The Resistance needs to be VERY careful not to hit civilians areas. Whether those Sunnis are Syrians or Lebanese, they are our brothers and sisters.

Filth on both side of the border. Let them kill each others.

Hizb should wipe M14 off of the map