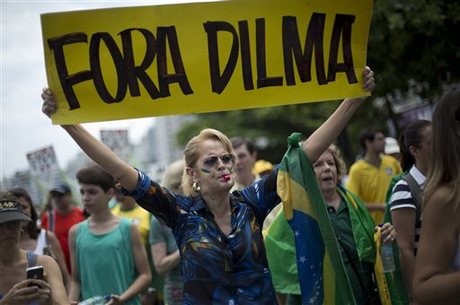 Thousands of Brazilians took to the streets Sunday to demand that embattled President Dilma Rousseff -- facing a weak economy and calls for her impeachment -- be removed from office.

Rousseff is fighting for her political life, standing accused of illegal budgeting maneuvers that she says were long-accepted practices by previous governments.

A one-time political prisoner during the military regime, she calls the attempt to bring her down a "coup."

"Time has shown that Dilma is unable to govern. She's thrown the country down a well," argued Adriano de Queiroz, 36, a protester in the capital Brasilia.

If there was any good news for her on Sunday, it was that turnout at the rallies seen as a barometer of national mood was less than expected.

Just days ago, pro-Rousseff and opposition deputies pushed and screamed during voting to form an impeachment commission.

But protesters were much calmer Sunday, marching peacefully behind a giant inflatable Rousseff dressed up as Pinocchio in Brasilia.

The turnout hit about 81,000 nationwide with 39 cities reporting demonstrations, according to police cited by the Globo television network.

About 30,000 rallied in the country's wealthy industrial and financial hub Sao Paulo, it said.

Either way, the turnout was a sharp contrast to the 2.4 million anti-Rousseff marchers that took to the streets on March 15.

It was the fourth time this year that demonstrators across the sprawling nation demonstrated to demand the removal of Brazil's first female president.

The turmoil is stirring passions across the South American country of 204 million, where Rousseff's Workers' Party has been in power since 2003 with the help of its ally PMDB.

And the protests come as Brazil readies for an international close-up -- in a matter of months, Rio de Janeiro will host the 2016 Summer Olympics, the first time the Games will be held in South America.

Political uncertainty is also adding to the country's economic woes, with GDP down 4.5 percent in the third quarter year-on-year, and the national currency down a third against the dollar this year.

In the latest sign of the dismal economy, the government announced year-on-year inflation for November of 10.48 percent -- the highest in 12 years.

With her popularity ratings at only 10 percent, Rousseff has little political muscle and the impeachment push in part reflects the country's anger at multiple crises, including the corruption scandal at state oil giant Petrobras.

On Tuesday, the Supreme Court suspended for one week the commission that will recommend whether or not Congress should impeach the president, citing irregularities.

Of the 65 congressional deputies elected in controversial circumstances to the panel, about 30 percent face criminal probes, according to a detailed count by specialist website Congresso em Foco.

The architect of the impeachment drive himself, House Speaker Eduardo Cunha, has been charged with taking as much as $40 million in bribes. He allegedly stashed the loot in secret Swiss accounts.

Analysts say that the entire impeachment crisis has in part been linked to Cunha's battle to distract attention from his case and ensure his continued influence as speaker.