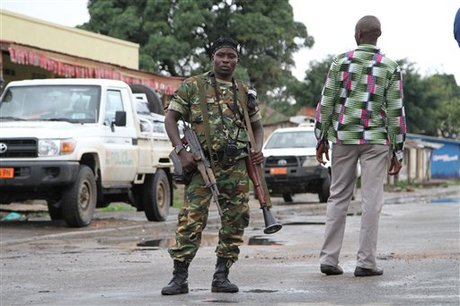 U.S.-based advocacy group Refugees International said that men and boys in Rwanda's Mahama camp, run by the United Nations and Rwandan authorities, were being recruited into "non-state armed groups" and faced threats if they refused.

The charity added that the Burundian recruits are trained in Rwanda and efforts are made to send them back to Burundi via neighboring Democratic Republic of Congo.

"The arming of Burundian refugees in Rwanda would not only represent a grave violation of international law, but also a serious threat to peace in Burundi and the entire region," said Michael Boyce of Refugees International.

"In that context, refugees' claims that some Rwandan officials turn a blind eye to recruitment, and possibly even facilitate it, are deeply disturbing," he said.

The report found at least 80 cases of alleged recruitment, with some refugees saying they were, "trained inside Rwanda, transported in Rwandan military vehicles, and trained by Kinyarwanda-speaking individuals wearing military uniforms."

Refugees gave conflicting accounts of which groups they were being recruited into, including long-standing National Forces of Liberation (FNL) rebels and a new group named “Imbogoraburundi”, meaning "Those Who Will Bring Burundi Back".

The Rwandan government has in the past denied allegations of involvement in recruiting rebels.

Refugees International said "the civilian and humanitarian character of asylum has been and continues to be undermined in Rwanda, in violation of international law," and called for recruitment to stop and for those responsible to be punished.

Burundi's crisis began in April when President Pierre Nkurunziza announced his intention to run for a controversial third term, which he went on to win in July.

Hundreds of people have been killed, including at least 87 on Friday when armed rebels attacked three military installations in the capital Bujumbura.

More than 200,000 people have fled the country in the last eight months, according to the U.N.

Burundi has repeatedly accused Rwanda of backing rebels intent on overthrowing the government in Bujumbura, allegations Rwanda had denied.