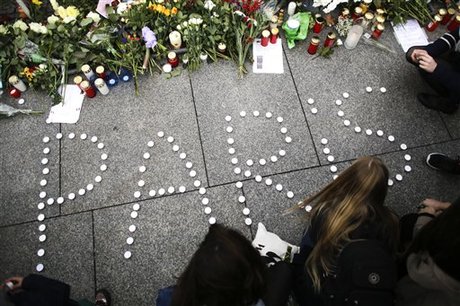 Austrian police have arrested two people with suspected links to the Paris attacks, prosecutors said Wednesday, with an Austrian newspaper reporting the two are French citizens posing as refugees.

"Two people coming from the Middle East were arrested at the weekend," Robert Holzleitner, a spokesman for prosecutors in the western city of Salzburg, told AFP.

"Indications of a possible link to the Paris attacks are currently being investigated."

He said the two were arrested in a center for refugees in Salzburg "on suspicion of belonging to a terrorist organization."

The Kronen-Zeitung daily reported online that the two men are French and entered Austria in October together with members of the cell who carried out the November 13 attacks in the French capital that killed 130 people.

The newspaper said they had been posing as refugees and had fake Syrian passports, having traveled up from Greece through the Balkans into Austria along with hundreds of thousands of migrants arriving in recent months.

Three of the nine Paris attackers have yet to be identified, including two of the three suicide bombers who blew themselves up outside the Stade de France stadium, who appear to have used fake passports to sneak into Europe.

The Kronen-Zeitung, without citing sources, said that the information leading to the arrests came from an unspecified foreign intelligence agency, and that the two men had Algerian and Pakistani roots.

The tabloid also said that the two had been waiting in Salzburg, a city popular with foreign tourists, for orders to carry out more attacks.

News of the Austrian arrests came a day after a 29-year-old man with suspected links to the Paris attacks claimed by the Islamic State (IS) group was arrested in a housing estate in the eastern Paris suburb of Villiers-sur-Marne.

Six counter-terrorism judges are overseeing the investigation -- an unprecedented number for France -- and the probe has seen 2,700 police raids and 360 people placed under house arrest.

French Interior Minister Bernard Cazeneuve said a total of 334 people had been arrested since the attacks, of whom 287 were held for questioning, and that over 400 weapons had been seized.

Salah Abdeslam, a 26-year-old French citizen who is thought to have played a key logistical role, is still on the run and subject to an international arrest warrant.

Abdeslam was also registered as having been in Austria on September 9 after being stopped in a routine traffic check in a car with Belgian number plates with two other men, Austrian authorities said on November 17.

Abdeslam told police he was "on holiday" in Austria.

He also traveled to Hungary before the attacks where he "recruited a team" from unregistered migrants passing through, Hungarian officials said on December 3.