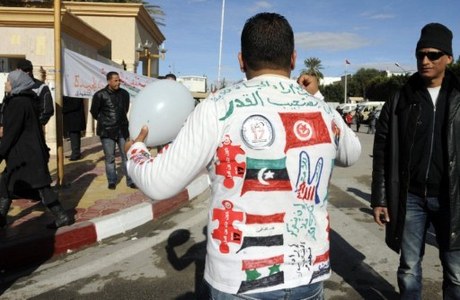 Five years after triggering the Arab Spring, Tunisians doggedly pursue a democratic transition as other countries remain gripped by violence and repression.

Here is a recap of where things now stand in the Middle East and North Africa:

On December 17, 2010, a young street vendor frustrated by police harassment sets himself ablaze in the town of Sidi Bouzid and later dies, triggering protests against poverty and unemployment.

Despite political crises and assassinations in 2013, Tunisia adopts a new constitution in 2014 that limits presidential power.

But the transition remains fragile, and jihadists from the Islamic State group (IS) have struck three times in 2015.

Syria has been shattered by almost five years of civil war that has killed more than 250,000 people and forced millions from their homes, with many going to Europe.

Peaceful protests that began on March 15, 2011 were crushed and transformed into an armed insurrection against President Bashar Assad.

In 2013-2014, lightly armed rebel groups are pushed aside by Islamic militias such as the al-Nusra Front, an al-Qaida affiliate, and IS, which fights both the rebels and forces loyal to Assad, including Iranian soldiers and the Lebanese Hizbullah.

Since September 2014, the United States and allies have carried out air strikes against IS. In September 2015, Russian air forces join the fight on Assad's side.

After a popular 18-day revolt left almost 850 people dead, Hosni Mubarak steps down from the presidency on February 11, 2011 after almost three decades in power and hands power to the army.

In June 2012, Islamist Mohamed Morsi, backed by the Muslim Brotherhood, becomes the first civilian -- and freely elected -- head of state.

The following year is marked by crises and political dissent, resulting in Morsi's ouster by the armed forces led by Abdel Fattah al-Sisi.

Hundreds of people, mainly Morsi supporters, have since been killed in street clashes, and security forces have made thousands of arrests among the Muslim Brotherhood ranks, including the former president and most of its key leaders. Hundreds have been condemned to death, including Morsi.

Sisi is elected president in June 2014, promising to restore security in a country plagued by an Islamist insurgency, mostly in the Sinai peninsula, that has killed hundreds of security forces. Parliamentary elections this year bolster his position.

Since the oil-rich North African nation descended into chaos after the ouster and killing of long-time leader Moammar Gadhafi in 2011, authorities have struggled to maintain order in a country splintered by tribal loyalties and former militias vying for power.

Libya also has two rival parliaments and governments, one in the capital Tripoli and one in the eastern city of Tobruk, that have been negotiating for more than a year under U.N. auspices to agree on a national unity government.

Taking advantage of the chaos, IS has gained a foothold in Libya, which has also become a hub for trafficking of migrants towards Europe.

Long-time president Ali Abdullah Saleh steps down in February 2012 after a popular uprising. He is succeeded by his vice president, Abedrabbo Mansour Hadi, who is subsequently elected to the post and initiates a process seeking a political settlement for the divided country.

In 2014, Shiite rebels launch an offensive, seizing the capital Sanaa and other parts of the country, and driving Hadi into Saudi exile after he flees to the southern city of Aden.

Saudi Arabia forms a coalition in March 2015 to help Yemen's government in its fightback against the rebels known as Huthis, who are allied with renegade troops still loyal to Saleh.

Nearly 6,000 people have died in the conflict and the country is suffering from a severe humanitarian crisis.

Furthermore, al-Qaida has taken advantage of the unrest to expand its influence, and IS has also carried out attacks in the country.

A protest movement by the country's Shiite majority, seeking democratic rule, erupts on February 14, 2011 and is put down a month later by the Sunni al-Khalifa dynasty. The small Gulf kingdom is still the scene of unrest.

The opposition, which wants a true constitutional monarchy, boycotts parliamentary elections in November 2014 after the government refuses to budge on fundamental issues.