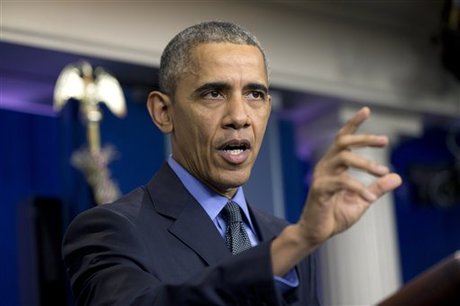 Obama capped a week in which he has tried repeatedly to reassure a jittery Americans that his administration can neutralize the terror threat, with an end-of-year press conference that only underscored the tough task ahead.

"It is very difficult for us to detect lone wolf plots," Obama acknowledged as officials continue to piece together how a couple shot 14 people dead at a party in California.

"Despite the incredible vigilance and professionalism of all our law enforcement... you don't always see it."

"This is a different kind of challenge than the sort that we had with an organization like Al-Qaida," Obama said before leaving for San Bernardino, the site of the shooting, and on to Hawaii for Christmas.

"Essentially, you have ISIL trying to encourage or induce somebody who may be prey to this kind of propaganda."

Obama is under intense pressure to quickly and decisively end a threat that may take years if not decades of military, security, diplomatic and economic effort to neutralize.

Part of the puzzle, he said, was to end the brutal war in Syria that has created fertile soil for the Islamic State to grow.

"Our view has been that you cannot bring peace to Syria, you cannot get an end to the civil war unless you have a government that is recognized as legitimate by a majority of that country. It will not happen."

President Bashar Assad, Obama said, "is going to have to leave in order for the country to stop the bloodletting and for all the parties involved to be able to move forward in a non-sectarian way. He has lost legitimacy in the eyes of a large majority of the country."

Working with Assad against Islamic State -- as suggested by Russia and Iran -- would make the United States "even more of a target for terrorist activity," he added.

But even as Obama tried to prod one Middle Eastern leader toward the exit, he was left to defend previous U.S. actions in the ever-more-volatile region.

Obama admitted "a failure on the part of the entire international community" in Libya, where the Islamic State now has a foothold.

"I think that the United States has some accountability for not moving swiftly enough and underestimating the need to rebuild government there quickly," he said.

"As a consequence, you now have a very bad situation."

But from Egypt to Syria to Libya, Obama cautioned against "revisionist history" that blames the United States for creating instability by toppling regimes.

"We didn't trigger the Arab Spring," he said pointing to regimes who failed to address the wishes of the people.

In Libya, Moammar Gadhafi "had already lost legitimacy and control of his country "Obama said.

In Egypt "we did not depose Hosni Mubarak. Millions of Egyptians did, because of their dissatisfaction with the corruption and authoritarianism of the regime."

During the press conference, Obama again made the case that closing the controversial Guantanamo prison would take a way one tool for Islamic State recruiters.

He refused to rule out bypassing Congress in shutting the facility by executive order if needed, vowing to "steadily chip away" at the number of inmates being held there.

"I'm not going to automatically assume that Congress says no," Obama said. "I think we can make a really strong argument."

But he admitted, "it will be an uphill battle."