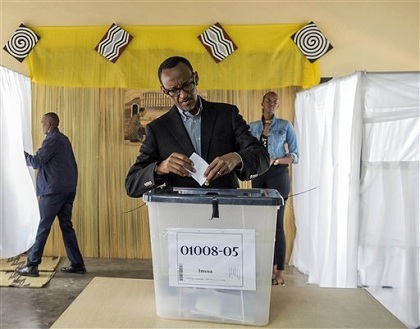 "We have seen the will of the people. It's clear that what the people want, they can achieve," said National Electoral Commission chief Kalisa Mbanda, announcing 98.1 percent had voted "yes" with preliminary results in from some 70 percent of the country.

"They called for the change of the constitution and they have made it," the pro-government New Times newspaper quoted him as saying.

Kagame, 58, could now be in power potentially for another 17 years.

"What is happening is the people's choice," he told reporters after casting his vote on Friday.

The amendment allows Kagame to run for a third seven-year term in 2017, at the end of which the new rules take effect and he will be eligible to run for a further two five-year terms.

The United States and European Union have denounced the proposed amendments as undermining democracy in the central African country.

On Friday, the EU delegation in Kigali said there had been a lack of "sufficient time and space for debate" on the issue, with the date for the referendum only announced on December 8 and the draft of the changes "only published publicly less than one day ahead of the vote."

"The short time between the announcement and the holding of the referendum left little or no opportunity for all parties to present their arguments," the EU said.

Kagame has run Rwanda since his ethnic Tutsi rebel army, the Rwandan Patriotic Front (RPF), ended a 1994 genocide by extremists from the Hutu majority, when an estimated 800,000 people were massacred, the vast majority of them Tutsis.

The issue of long-serving rulers clinging to power has caused turmoil in Africa, where some leaders have been at the helm for decades.

Kigali's pro-government New Times newspaper said in an editorial on Saturday that Rwandans had spoken out "regardless of the lame attempts to pour water on the process by Rwanda's closest 'development partners'" in an allusion to U.S. and European criticism.

The country's tiny opposition Green Party also protested that it was impossible to organize a counter campaign at such short notice.

"The opposition would have won," Green party president Frank Habineza said in a statement on Saturday, adding the party "will not give up on the struggle to make Rwanda a vibrant democracy."

Some Rwandans said they had boycotted the vote as the outcome was already known.

Carina Tertsakian, of Human Rights Watch (HRW), noted that after "years of government intimidation... open expressions of dissent are rare," and that approval of the referendum was no surprise.

"As one man told us: It would be stupid to vote 'no' because it won't change anything," she added.