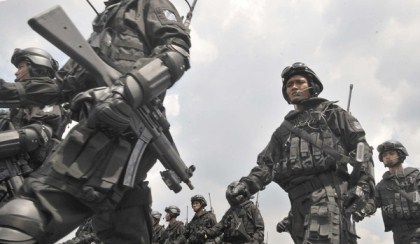 Indonesian police said Monday they were on their highest terror alert after foiling plans for a suicide attack in Jakarta and arresting radicals linked to the Islamic State group.

Several of the arrested men were allegedly linked to a planned suicide bombing in Jakarta during the New Year celebrations, according to documents seized in the raids.

The extremists were targeting shopping malls, police stations and minority groups across the country, the national police chief said.

According to documents seized in the raids, police claim the two cells were identifying attack sites in Jakarta as well as West Java, Sumatra and Indonesian Borneo.

"We are taking preventive actions. We are implementing the highest alert," said police chief Badrodin Haiti.

"There are several things that (these groups) can do, like bombing or other violent acts such as shootings, burning, or unarmed attacks," he added.

Other security officials said nearly 150,000 police and military officers would be dispatched to guard important sites between December 24 and January 2, when police would be extra vigilant.

Haiti confirmed that the Australian Federal Police, the FBI and Singaporean authorities had assisted with uncovering the alleged terror plots.

The increased security comes as senior ministers from Australia and Indonesia agreed to boost intelligence sharing, including on terrorism financing, following bilateral talks in both Sydney and Jakarta.

Indonesia, the world's most populous Muslim-majority country, suffered several major bomb attacks by Islamic radicals between 2000 and 2009, including the 2002 Bali bombings that killed 202 people.

But a crackdown has weakened the most dangerous extremist networks.

However the emergence of IS has sparked alarm that Indonesians returning from battlefields in the Middle East could revive them.

Indonesian police in August arrested three people with links to the IS group who were planning to launch bomb attacks during celebrations to mark the country’s independence.