French Forces Kill or Capture 'about 10' Jihadists in Mali 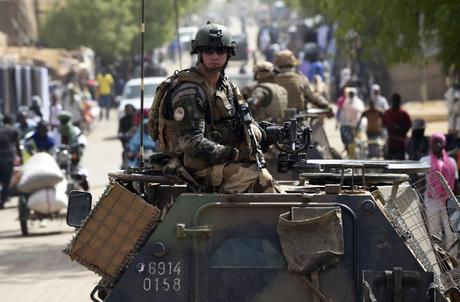 French forces killed or captured around 10 members of a jihadist movement in heavy fighting at the weekend in northern Mali, the French defense ministry said Tuesday.

The troops of France's Barkhane force engaged in a four-hour firefight overnight Saturday near Menaka against the Al-Qaida-linked group Al-Murabitoun, the ministry said in a statement issued in Paris.

"Around 10 terrorists were neutralized," the statement said, adding that the French soldiers seized two pick-up trucks, a dozen motorbikes and "a large quantity of arms and explosives".

The statement said Al-Murabitoun had been "responsible for many attacks on civilians of Mali and Niger, as well as local army forces and international forces".

Al-Murabitoun was formed in 2013 by the merger of the Signatories in Blood group led by Al-Qaida-linked Mokhtar Belmokhtar and the Movement for Oneness and Jihad in West Africa (MUJAO), which has been highly active in the Gao region of northern Mali.

It claimed the November 20 attack on the Radisson Blu hotel in the Malian capital Bamako that claimed 20 lives, saying it was a joint operation with Al-Qaida in the Islamic Maghreb (AQIM).

On Monday the government reimposed a nationwide state of emergency for the last 10 days of the year to head off any terror threats.

Northern Mali fell under the control of jihadist groups linked to Al-Qaida in 2012.

The Islamists were largely ousted by a French-led military operation launched in January 2013, but large swathes of Mali remain lawless and prone to attacks.