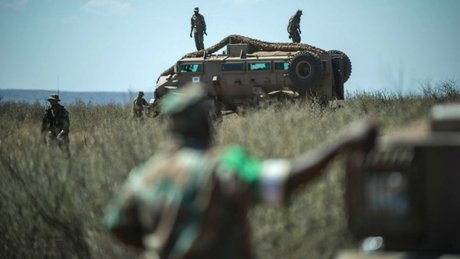 Burundi faces mounting regional pressure to accept African Union peacekeepers it calls an "invasion force", diplomats said Wednesday, with the issue a key point of talks due in Uganda next week.

The 54-member African Union said last week it would send a 5,000-strong force to halt violence that has sparked fears Burundi is sliding back towards civil war, and has pledged to send troops despite Burundi's fierce opposition.

Pushing for Burundi's acceptance of the AU force will be a key part of the latest round of talks aimed at ending months of violence, regional diplomats said.

Burundi's unrest began in April when President Pierre Nkurunziza announced his intention to run for a controversial third term, which he went on to win in July.

"There are 14 groups including the ruling party, opposition parties and civil society who will be attending," Kiyonga said, without confirming if Nkurunziza will attend.

Hundreds of people have been killed in months of street protests in Burundi, which have devolved into frequent armed attacks with gunfire disrupting the nights and dead bodies appearing on city streets almost every day.

Talks are to be held at Uganda's presidential palace in Entebbe, just outside the capital Kampala.

But those talks will also involve the key opposition coalition, Cnared, a grouping that presents itself as upholding the Arusha peace agreement that ended more than a decade of civil war in 2006, and which they say Nkurunziza has undermined, their spokesman Jeremie Minani said.

Burundi's government has so far refused to hold talks with Cnared present, calling it "terrorist organization" and accusing it of being behind a failed coup in May as well as the ongoing attacks on security forces in Burundi.

In Tanzania, which borders Burundi and hosts the world's third largest refugee camp of Nyarugusu with some 110,000 Burundians, President John Magufuli called for "dialogue".

Tanzania's presidency said in a statement the issue of the AU force will be a key part of the Uganda talks.

Burundi, which itself contributes several thousand troops to peacekeeping forces -- including the AU mission in Somalia and the U.N. one in Central African Republic -- has said there is no need for peacekeepers in Burundi.

Kenyan President Uhuru Kenyatta this week sent an envoy to meet Nkurunziza, delivering a message condemning "the use of violence to pursue political objectives" and supporting the Ugandan-led talks.

"The leaders of Burundi must place the interest of their nation... at the fore of their activities," Kenyatta said. "The guns must be silenced."

Rwandan President Paul Kagame warned the violence in the neighboring nation had the "potential to spill over" to Rwanda, but said he would not send troops to Bujumbura, while also rejecting claims of arming Burundi refugees as rebels.

Kagame dismissed allegations leveled by Burundian officials and aid groups that Rwanda is recruiting and arming refugees as rebel fighters.

U.S.-based advocacy group Refugees International said last week that men and boys in Rwanda's Mahama camp, run by the United Nations and Rwandan authorities, were being recruited into "non-state armed groups" and faced threats if they refused.

The charity said the Burundian recruits are trained in Rwanda and then efforts are made to send them back to Burundi via neighboring Democratic Republic of Congo.

"I haven't even seen the tiniest evidence of that so it becomes a lot of politicking," Kagame said, calling the accusations "childish".