2 Gunmen Dead in New Fighting at India Air Force Base 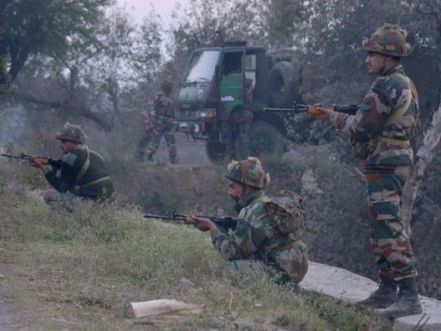 Two suspected Islamic insurgents were killed Sunday when fighting flared up again at an Indian air force base, a senior police officer said, a day after the initial bloody raid on the base close to Pakistan.

Seven soldiers and four attackers were earlier confirmed killed during the assault on the Pathankot base in the northern state of Punjab, which triggered a 14-hour gunbattle Saturday.

The attack -- a rare targeting of an Indian military installation outside disputed Kashmir -- threatens to undermine improving relations with Pakistan.

It came just about a week after Indian Prime Minister Narendra Modi paid a surprise visit to Pakistan, the first by an Indian premier in 11 years

Security officials suspect the gunmen belong to the Pakistan-based Jaish-e-Mohammed, the group that staged the 2001 attack on the Indian parliament which brought the two countries to the brink of war.

Indian Home Minister Rajnath Singh Saturday tweeted "all five terrorists" have been killed but security officials at the site had found only four bodies.

Early Sunday afternoon security forces came under heavy fire inside the base during a search for munitions and possible militants.

The police officer told AFP on condition of anonymity the two militants were killed four hours after the first contact was made Sunday. But the search would continue before the base was declared safe.

"Both have been killed. We are yet to retrieve their bodies," the officer said.

The base commander, J S Dhamoon, told reporters separately the operation was close to completion but gave no information on any fresh casualties.

The Pathankot air base houses dozens of jet fighters and is important for its strategic location about 50 kilometers (30 miles) from the Pakistan border.

Rajiv Mehrishi, a top home ministry official, said troops and police had foiled the aim of the intruders to damage equipment at the base.

"Due to active intelligence and quick action taken by forces we were able to ensure there was no damage to the assets," Mehrishi told reporters in New Delhi.

Mehrishi said seven security personnel were killed and 20 injured but declined to give any details of Sunday's gunbattle.

Among the military dead was a lieutenant-colonel in the elite National Security Guard, a commando unit. Also killed was Subedar Fateh Singh, a gold medalist at the 1995 Commonwealth Shooting Championships in New Delhi, an air force spokeswoman said.

In July three gunmen said to be Pakistan-based Lashkar-e-Taiba militants killed seven people including four policemen in an attack in the Sikh-majority state of Punjab.

The possible involvement of Pakistan-based militants in the latest raid could be a setback for peace overtures between the nuclear-armed rivals, who have fought three wars since independence in 1947.

Modi Saturday termed the attackers as "enemies of humanity" but did not blame Pakistan.

Islamabad, meanwhile, moved quickly to condemn the attack which it described as a "terrorist incident."

The U.S. State Department termed the assault "a heinous" terrorist attack and urged the two rivals to work together to hunt down those responsible.

Modi's December 25 visit to the Pakistani city of Lahore to meet his counterpart Nawaz Sharif indicated a potential thaw in tensions, and the foreign secretaries of both countries are scheduled to meet in Islamabad this month.