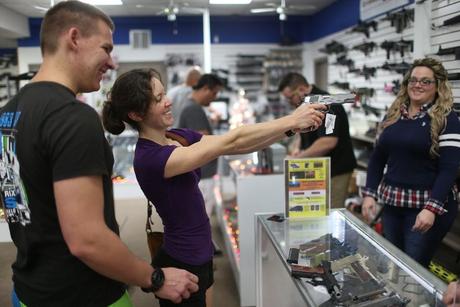 Kicking off his last year in the White House with a defiant show of executive power, Obama will ignore Congressional opposition and take a series of unilateral steps to regulate gun sales and curb illicit purchases.

Attorney General Loretta Lynch said the measures would tighten rules on who must register as a gun dealer, narrow the "gun show" loophole that allow buyers to dodge background checks and a crackdown on "straw purchases" that see weapons purchased through intermediaries.

It would also encourage the Pentagon, with its vast buying power, to procure weapons from manufacturers who use " gun safety technology" such as fingerprint scanners.

Obama will discuss the new measures -- which Republicans who control Congress, weapons makers and gun enthusiasts have already lambasted as an infringement of constitutional freedoms -- in the East Room of the White House on Tuesday.

Around 30,000 people die in gun violence every year in America, most by suicide.

During Obama's seven years as president, he has often shown flashes of anger and frustration at Congress's refusal to tighten gun controls, most notably after the mass slaughter of Connecticut schoolchildren, South Carolina churchgoers and Colorado movie watchers.

The measures will stop well short of introducing universal background checks or registering or collecting some of the more than 300 million guns already thought to be in circulation in the United States, moves that would likely need Congressional approval.

"It will," he said, "potentially, save lives in this country" and spare families heartache.

But even in taking limited measures, by acting alone and against the will of Congress, Obama has invited political and legal maelstrom.

Several Republican presidential candidates and the speaker of the House of Representatives, Paul Ryan, lined up to accuse Obama of "dismissiveness" toward Americans who value the constitutional right to bear arms.

"We all are pained by the recent atrocities in our country, but no change the president is reportedly considering would have prevented them," said Ryan. "We have seen consistently that an underlying cause of these attacks has been mental illness."

"This is a dangerous level of executive overreach, and the country will not stand for it," Ryan warned.

Republicans have long positioned themselves as the champion of gun owners, who make up a sizable voting bloc in many areas that could decide 2016 election races.

Polls have shown most Americans back tougher gun laws. But that support has ebbed recently amid concerns about the Islamic State group and the wider threat from terrorism.

Obama's plans could put pressure on some of his Democratic allies who face tough election battles in toss-up states and conservative congressional districts this autumn.

Republicans may also try to block funding for parts of the package designed to more aggressively enforce existing laws, including the hiring of 200 additional federal agents at the Bureau of Alcohol, Tobacco, Firearms and Explosives.

But politicians from both parties are sure to embrace the issue one way or another, using it to galvanize support and donations among supporters.

On Thursday, Obama will take part in a primetime town-hall style debate on gun control to try to boost his case.

The event, broadcast by CNN, will take place at George Mason University in Fairfax, Virginia.

A more serious challenge to the new rules may come through the courts.

Obama's lawyers have spent months "scrubbing" existing laws to see where rules could be tightened, while surviving inevitable court challenges.

"A lot of the work that has gone on behind the scenes to take a look at what the president can do using his executive authority has been grounded in the knowledge that the gun lobby and the Republicans in Congress who regularly do their bidding are going to look for ways to try to stop it," said White House spokesman Josh Earnest.

Ahead of the announcement Obama insisted the measures would fall "well within my legal authority."

But similar executive efforts by Obama to bring millions of illegal immigrants out of the shadows by shielding them from deportation have prompted a slew of lawsuits and left a key Obama policy goal in the hands of the Supreme Court.